The North Island Kokato (Callaeas wilsoni) is of ancient lineage with very few surviving close relatives (above). Its closest cousin is the saddleback (Philesturnus spp.).

“The video clip below was taken on Tiritiri Matangi Island, New Zealand. The island has been kept free of pests like rats, stoats and possums so that endemic bird species, which are mostly poor flyers, have a chance to re-establish their numbers.

“The tagged bird was seen on a branch at almost eye level, next to a path we took while returning to our waiting ferry.

“The bird can be seen holding down the leaf with one leg while tearing off bite-sized pieces to savour. After devouring the whole leaf, it hopped off to harvest another delectable juicy leaf.

“Its blue wattles and black mask gives away its identity.” 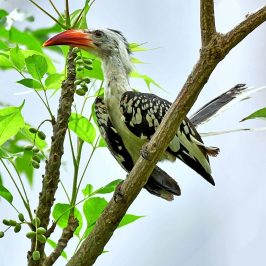