“The *Drongo Cuckoo (Surniculus lugubris) aka Square-tailed Drongo-cuckoo, is an uncommon resident as well as passage migrant in Singapore. “This cuckoo has an overall black glossy plumage. Although dark, the plumage reflects light and this makes it appear glaring at times when the sun shines on it. “Depending on the angle of view, the plumage may appear with a blueish, greenish or even brownish sheen (above). Contrasting with its black plumage, white barred markings can be found on its under-tail. There are also tiny white spots at the tips of feathers on its rump and its tail (below). “Was fortunate to encounter this cuckoo at an event venue (park) sign (top). Observing it over an extended period proved rewarding as it obliged by indulging in comfort behaviour. While waiting for its breakfast, it was occasionally preening, sunning, and stretching (above, below). Breakfast menu included caterpillars – both hairy and non-hairy that were caught on the ground as well as in the canopy. “Not commonly seen features showcased on this occasion: 1. a small spot of white on its nape – normally difficult to see due to its tiny size (above);
2. white thighs – often obscured from view (third from top);
3. a white stripe on its under-wing – seen when it opened its wings during stretching (fifth from top);

“The juvenile of this species is distinctive with white spots covering all over (below).” *Note: We follow C. Robson, 2000 ( A field guide to the birds of South-East Asia. New Hollad, London) as far as common names are concerned as this field guide is widely used in the region. 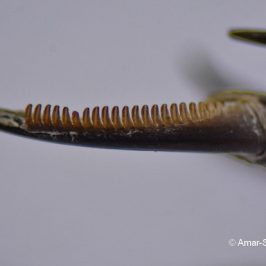 A local veterinarian friend contacted me for some advice on a Cattle Egret (Bubulcus ibis...