“I heard two Plaintive Cuckoos (Cacomantis merulinus threnodies) calling today in what appeared to be a responsive manner. I thought this was the ‘usual’ territorial behaviour. I found one of the birds on a bush over-hanging an ex-mining pool and was surprised to find the other seated very close by (below). Due to terrain limitations, I could not approach any further but tried to observe from where I was, as social behaviour in these cuckoos is not well documented. “I first considered that these were two adult males ‘fighting’ over territory but the demeanour was not that of aggression. Throughout my observation period there was no attempt for one bird to posture or approach the other. One bird even stopped to preen in between calls. “They called in a responsive manner to each other. A short audio clip HERE. The common phi-phi-phi-hihihi calls were used most of the time in varying intensity but also the ti-ter-weet calls. The calls continued for a long period, even as I was leaving the site. “I now consider that this is possibly courtship behaviour. Sexing of Plaintive Cuckoos is difficult. Cuckoos of the World, by Johannes Erritzøe, Clive F. Mann, Frederik P. Brammer and Richard A. Fuller. Helm, 2012 suggests that for females in the grey morph “as male but abdomen barred white and rectrices more barred”. My views of the birds were limited by distance and angle of image taking (the mining pool).

“Appreciate any opinions. I have cc this observation to selected individuals and hope they can also offer some insight.” 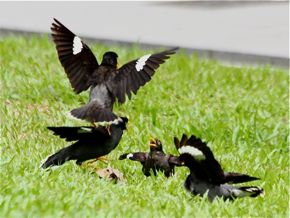 “I have witnessed Javan Mynas (Acridotheres javanicus) fighting on a few occasions but have not... 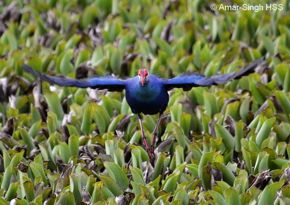