“The usual way pond-herons forage is by wading or staying still in shallow water and striking at preys that innocently wandered near. Most of us, including me, have not seen pond-herons plunge-diving for fish but I had that rare encounter recently. “Early on the morning of 30th Nov 2014, the tide was receding when a handful of pond-herons in non-breeding plumage had gathered on the banks of this small river. There were at least 5 pond-herons. “Instead of foraging in shallow water, all the pond-herons except for one were waiting on dry ground on both sides of the river. Within 15 minutes that I was there, three episodes of plunge-diving were observed. “Stretching its neck to find its prey, the pond-heron would take flight when a prey was found. “Targeting its prey, the calm water would soon be disturbed as its head took a plunge into the water. “Except for its wings, the bird would soon disappear as it submerged into the water. The submersion was brief. In a split second, its head emerged out of water. “Clamped firmly betweens its mandibles was its prey. “At the same time that it emerged out of water, an about-turn was made. Just as the bird complete its about-turn, a powerful down-stroke of its wings was executed. “Momentum was not lost as the heron lifted itself out of the water in one smooth flowing action. It dashed back to the bank where it quickly swallowed the fish. “The success rate was two times out of three.

”These pond-herons may most likely be Chinese Pond-herons (Ardeola bacchus) but the possibility of them being Javan or Indian Pond-herons cannot ruled out.” 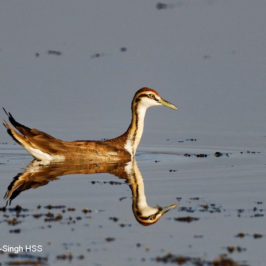