‘In 2009, my second son and his family went to stay at the Sterling Condominium located along Bukit Timah Road. The Sterling is next to the old railway track and is near to the Bukit Timah Nature Reserve. It consists of two rows of low-density apartment units facing each other and separated by a swimming pool. One morning a few months after shifting into their apartment they heard loud squawking sounds and the flapping of wings approaching their apartment from the direction of the railway track. Then there was utter silence.

“When the family went to their balcony window to check, they were greeted by a pair of Oriental Pied Hornbills (Anthracoceros albirostris) standing silently on their balcony railing and looking into their apartment unit (top). The birds had a bird’s eye-view of the sitting room, the dining room right through to the kitchen of the apartment (above).

“My son got a plate of fruits from the fridge, cut them up and placed the morsels on the balcony railing. The birds flew to the opposite building and watched the action. Once my son retreated from the window, the birds flew back to the railing to enjoy the fruit while my son’s entire family watched from just a few feet away (above).

“Thus began a lasting relationship. Each morning at seven the birds would make squawking calls to announce their arrival. But the moment they landed on the wooden railing of the balcony there would be utter silence as the birds watched the activities in the apartment. Human movements indicated to them that their food was being prepared and they would soon have their breakfast. On the several occasions when I stayed at my son’s apartment, I considered it a real privilege to see the birds at close range and I had the opportunity to feed them. They were such majestic birds. The birds are monogamous and they made such a loving pair.

“In July 2014 the birds disappeared for a few months. This caused some anxiety as we had got accustomed to their visits. Then one day in October 2014 the two birds appeared and what a surprise. They had brought along their two chicks to introduce them to us (above). It was such a touching sight to see the family lined up in a row on the balcony railing.”

Note: All photographs by Lionel Ch’ng 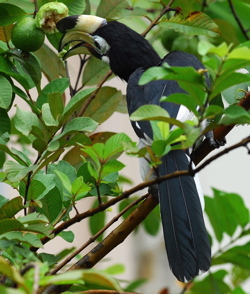 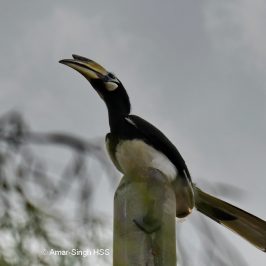