“One of three critically endangered crabs that are uniquely Singaporean, the Reticulated or Singapore Swamp Crab (Parathelphusa reticulata), is so named for the beautiful reticulate or mesh-like patterning on its carapace (below). “Discovered and named by Prof Peter Ng of the National University of Singapore in 1990, a gripping account of its discovery is found here LINK and reproduced as follows :

“Ng’s ‘all time favourite’ discovery came in 1990. In 1988 he wrote a book on the freshwater crabs of Peninsular Malaysia and Singapore in which he recorded five true freshwater crab species from Singapore, including two endemics. ‘I was pretty confident I had found all the freshwater crabs there were to find on such a small island with so little forest,’ Ng says. ‘But in 1989 a student showed me a photograph of a crab from a small patch of swamp forest in the centre of the central catchment, from an area I had sampled before.

The animal looked rather odd, with a rather unusual colour pattern, but I was rather sure of myself then and dismissed it merely as an extreme variant of a common species found there, Parathelphusa maculata. Some months later, I got a specimen of this ‘variant’ myself, and doubts began to surface in my mind about its presumed identity. But the specimen was a juvenile, and I had to get an adult specimen to be dead sure that it was a new species. The student and I subsequently visited the swamp many times, often in the middle of the night, to find this elusive animal; we even sacrificed our New Year’s Eve in 1990 in an attempt to find specimens. They are so secretive. By day, they hide in deep burrows in soft mud and are virtually impossible to dig out. The adults only come out in total darkness in the middle of the night, especially during moonless nights, and even then, they crawl slowly in shallow streams, underneath very dense leaf litter. This behavior, coupled with their well-camouflaged colour patterns, make them almost impossible to see. We finally learned how to catch them, though, by grabbing any clump of submerged leaves that moved. As it turned out, I had been wrong. It was a separate species after all, and to beat everything, it was new to science. I named it Parathelphusa reticulata for its beautiful carapace pattern. Moreover, this species was endemic to Singapore. As later studies showed, it is found only in a five hectare patch of swamp in Singapore, and nowhere else on this planet. This is a reasonably large crab, about 35 mm in carapace width. So if something like this could have been missed for so long, heaven knows what else we are still ignorant of in the catchment. This experience was a humbling one for me – I’ll never again be complacent about biodiversity, even in Singapore.”

“Imagine my surprise therefore, when I found not one but two of these precious ‘shy’ and ‘nocturnal’ creatures foraging in broad daylight in a small sunlit forest pool (below).

“And the darker one, of the Singapore Swamp Crab (below).

“Here is a photo of the lighter-coloured and friendlier one walking by, literally just under my nose, while I was attempting to photograph the damselfly (a Crescent Threadtail) that was perched on a twig just above the water (below).” 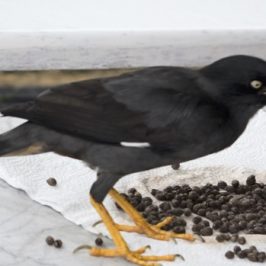 We were drying Papaya (Carica papaya) seeds on a piece of tissue paper in the...