“In September 2014, I became increasingly distracted and dazzled by the shimmering beauty of the Sapphire Flutterer (Rhyothemis triangularis, family Libellulidae) during my frequent visits to local pond sites. Whenever these dragonflies perch, their metallic blue wing patterns would sparkle and shimmer in the sun (above).

“Video clips of these dragonflies adopting various postures and flaunting their beauty may be previewed below:

“On the 20th September 2014, I was pleasantly surprised when a mating pair in wheel position landed right before my eyes at a lotus pond (below). “Upon closer inspection, one would be able to notice that the wing patterns of the female are actually a deeper and darker shade of blue (below). “As with many libellulid dragonflies, the mating was very brief and shortly after disconnecting, the female proceeded with the next phase of oviposition (egg laying) around the shallows.” 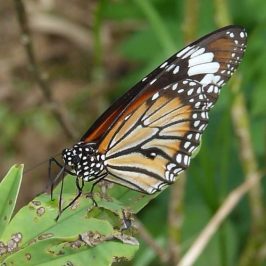