At 17:30h on the 17th August 2014, a lone male Common Fruit Bat (Cynopterus brachyotis) arrived in my porch to stake his territory (above). Hanging quietly from a wooden strip, he soon began to actively groom himself – licking and stretching his wings (below). Soon he crawled about the roof. By 19:00h a lone female flew in and landed by his side. With her arrival, he immediately directed his attention at her – unfolding his wings and flapping them to expose her to his scent, as well as grooming his penis LINK. Unfortunately she was disinterested and he moved away.

By 19:20h more bats flew in to increase the colony to eight. Then, yet more flew in, some roosting, others flying out. The colony soon increased to ten.

There were a few males flying in, maybe trying to displace the existing male, but without success. One was chased away by the resident male.

By19:30h a few individuals flew out, obviously to forage. Soon, the colony decreased in number.

By 23:00h about nine bats were still hanging from the roof. All this time the resident male was moving around, flapping his wings and checking out the females. But there was not successful mating up to then.

The edited video clip above gives an idea of the happenings in the roosting site on the evening of 17th August 2014. 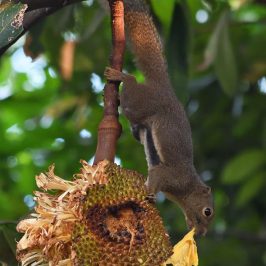