“I was pleasantly surprised that this Oriental Reed-warbler (Acrocephalus orientalis) allowed close observation of its foraging behaviour for an extended period; the first time in my life I left a Reed-warbler rather than the other way around. “During the migration period, prey has been documented to be taken by aerial sallying (uncommon) and predominantly by gleaning from foliage and stems of plants. Details on prey taken using the latter method is undescribed in my region (Wells 2007). “I saw this Oriental Reed-warbler take large number of winged insects over 45 minutes by working its way up and down dense bushes located by side of the trail. I observed at least 3 different types of winged Hymenoptera, one of which looked like a wasp (above). All winged prey were extensively branch swiped before being consumed. I was surprised not to note any caterpillars consumed. Prey was taken from a height of 0.5 to 2 meters, as the bird worked its way up and down the bushes.

“The bird was joined twice by other birds foraging in the same bushes but did not seem to mind their presence. Once by a pair of Yellow-vented Bulbuls (Pycnonotus goiavier) and another occasion by a pair of Ashy Tailorbirds (Orthotomus ruficeps). “There is a recent publication by Xiong on prey by this species. [Li-Hu Xiong and Jian-Jian Lu (2014) Food resource exploitation strategies of two reedbed specialist passerines: Reed Parrotbill and Oriental Reed Warbler. The Wilson Journal of Ornithology: March 2014, Vol. 126, No. 1, pp. 105-114.]. This is of course not in the migratory region and restricted to nestling diet but offers some support for my observations. Xiong observed that “Oriental Reed Warblers delivered mainly Diptera, Hymenoptera, Araneida, and Lepidoptera to their nestlings … About 85% of the diet of nestling Oriental Reed Warblers consisted of winged items…”

“I however do not agree with the conclusion in the article that ‘Oriental Reed Warblers are limited in their ability to retrieve prey from within reed shoots and depend on their flight ability to catch prey capable of flight’, as I saw this bird take numerous winged prey from the bushes and not in flight. 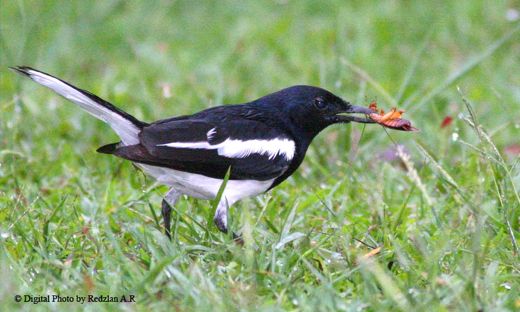 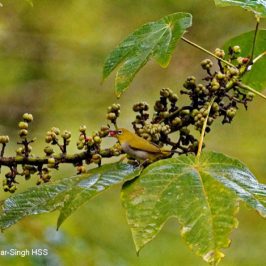 “Wells (2007) mentions that, for my region, the diet of this bird, Everett’s White-eye (Zosterops...