“They continue to feed in large numbers (130-150) at the site. Although they feed on wetlands with shallow water, they have been reported to feed on dried mud locations (Round 1988). “While watching this flock I spotted in the distance, one feeding on a Clam (above). I also spotted them taking smaller snails (top). They are also reported to feed on water snakes, frogs and large insects (Mukherjee 1974).

“A short video on some birds feeding is shown below.

“The reason for the gap in the openbill is still open for investigation. It is not used for handling snail shells and forms with age. An older individual with a worn out, large gap is shown below. The Golden Penda (Xanthostemon chrysanthus) is a popular wayside tree. Its conspicuous bunches of yellow... 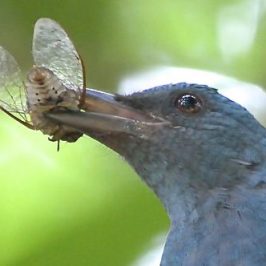 Ling Kwee Chang’s image of the female Asian Fairy-bluebird (Irena puella) with a cicada between...