“Many plants contain pyrrolizidine alkaloids as a defense mechanism against insect herbivores. In turn there are many insects that consume the plants and build up the alkaloids in their bodies.

“Danainae butterflies (Tigers and Crows) have long been recognised to be attracted to and ‘feed’ on plants of certain genera, both withered and living LINK.

“Here’s a Common Tiger (Danaus genutia genutia) scratching and sucking at a living Rattleweed (Crotalaria retusa) plant which I recorded during a recent visit to Pulau Ubin (top, image; below, video). Such behaviour of Danaine species has been recorded in Hong Kong as the article reports, but perhaps not yet in Singapore.

“In the video below, I recorded a number of Danainae butterflies gathering at a little patch of False Dill (Artemisia scoparia) at Pasir Ris Park, including a batch that had been cut and which lay withering on the ground. As mentioned in the article, the butterflies were probably applying from their proboscides a fluid capable of dissolving the alkaloids and then re-imbibing them.

“Below is a close-up video of a few of them – Dark Glassy Tigers (Parantica agleoides agleoides), Blue Glassy Tiger (Ideopsis vulgaris) and Spotted Black Crow (Eulopea crameri bremeri) feeding on the False Dill.

“Below is an image of a female Striped Blue Crow busy feeding on the withered False Dill.” 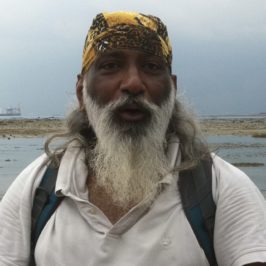