“I was tracking a pair of Common Flamebacks (Dinopium javanense) this morning (26th June 2014) and was fortunate enough to observe three episodes of their behaviour; one of which was interspecies and the other two within the species. (Image above shows the pair, photographed some time ago in the same locality.) “The female was foraging when she encountered a plantain squirrel (Callosciurus notatus). A standoff ensued. It was unclear if she was defending something or just decided not to fly away. The flameback was calling loudly with its wings spread open while the squirrel released a series of short barks. After a short while, the squirrel retreated. (Images above and below are extracted from a series of burst shots to show that this was a close encounter.) The image below is a better picture showing the flame back’s posture. Intraspecies (non)-aggression:
“The pair then moved on to a taller tree, where they encountered a female flameback (below). The anticipated showdown did not occur and they moved on shortly after. “As they approached a grove of coconut trees, the male flameback immediately flew into a window (above) while the female continued to hunt for food among the coconuts (below). This was unlikely to be an accidental window-crashing (as I first thought) as the male repeated this a few more times, and was at times resting on the window sill for a few moments before resuming his attack. No calls were made. The attack only ended when the female flew off and the male decided to follow. 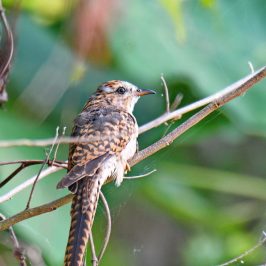