“On the afternoon of 11th May 2014, we were enjoying the flora and fauna at Fraser’s Hill, Peninsular Malaysia, when the nearby calls of Red-bearded Bee-eaters (Nyctyornis amictus) beckoned. As we scanned the sea of greenery, we first spotted a juvenile perched on an exposed branch (above). “It was mostly a deep, leaf green, with a hint of pale blue at the base of its bill. Just as we wondered where its parents would be, one of them arrived onto the scene and landed right next to it and thrust an insect into its mouth in a blink of an eye. This parent kept the juvenile company for a few more minutes (above), before flying off in search of more food. “After about ten minutes, a parent returned with more insects to deliver. It then watched over the young with much approval of its hearty appetite (above).

“As we continued our observations, we noticed that there was another juvenile in the same tree, but perched on a lower branch in a heavily shaded location. This sibling also received a steady supply of insects, such as beetles and dragonflies, from the conscientious parents.

“This species has been recorded to breed between January and August (Robson, 2000).” 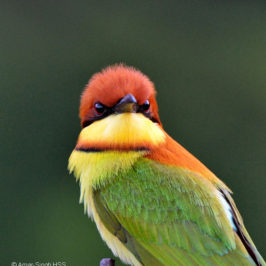 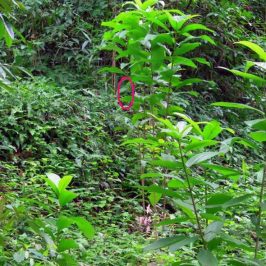 “In the past, I had numerous contributed articles written on various behaviours, sex differentiation, food...