“Many birds sun themselves. The most enthusiastic of sunbathers appear to be various species of doves, especially Zebra Doves (Geopelia striata) and Spotted Doves (Streptopelia chinensis). Both are frequent visitors to my garden, but Spotted Dove, being much larger, and somewhat aggressive (whoever said that doves were peaceful?) hog all the prime sunbathing spots. “Like mad dogs and Englishmen, they bake on my pathway in the noonday sun. Believe you me, the cement is HOT. Sometimes, when in a hurry to collect the mail, I don’t bother to put on slippers, and have to RUN to the front gate and back to avoid getting blisters on my feet. “But the Spotted Doves appear to have thicker skins. They can cook for half an hour at a time, going, I am sure, from rare, half-baked to well-done, before they finally take their leave.

“They are diligent in getting heated up. They carefully expose themselves, part by part, and turn to catch the most sunlight. Note the position of the shadows in the photos. You can see clearly that the dove with raised wing is doing its best to catch the maximum amount of sunlight on the underside.

“Sometimes, space is short on the pathway. “Well, doves that do not like crowds make do and sunbathe anywhere they can. “Visitors to this website have commented that quite a number of species of birds sunbathe, possibly to rid themselves of parasites. It is a known fact that certain fleas are sensitive to heat, and cannot survive high temperatures.

“Of course, some birds stand in the sun simply to dry out. “Chief among them would be the free-loading kingfisher who comes daily to help himself to the Platies (Poecilia maculatus) that breed in my water lily pond. Thankfully, Platies are prolific. “He takes his time to groom himself, and sometimes to have a good stretch, before flying off. “Other creatures that sunbathe do so to reach operating temperature. Reptiles are ectothermic, and can be sluggish when their body temperatures are low. To get ready for action, lizards warm up in the sun, like this Calotes versicolor – a foreign talent from Thailand that has made Singapore its home. “Once fully warmed up, such Agamid lizards, including our own native Calotes cristatellus, (which is now unfortunately very rare) are tremendously agile and extremely swift.

“Larger lizards, with larger body masses, take longer to warm up. A certain Monitor Lizard (Varanus salvator) has found a way to shorten the process. Not only does it sunbathe, but it chooses to do so right beside the airconditioning compressor of my home. “It often positions itself on a masonry wall erected to protect my plants from the blast of hot air from the airconditioner. There, it quickly warms up, before proceeding on its daily patrol.

“Monitors are active by day, cover great distances in search of food, and eat voraciously to obtain the energy that they require to move their bulk around. Plus, they supplement their intake with solar power.” 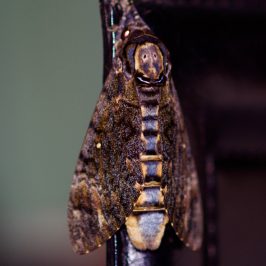