“I spent many happy minutes enjoying the colours and antics of a diminutive male Blue-crowned Hanging-parrot (Loriculus galgulus) on a Java Plum tree (Syzygium cumini) at Bidadari LINK, as it moved almost non-stop through the upper foliage feeding on flower buds for the nectar they contain (see screen grab above).

“In the clips below, the hanging-parrot can be seen plucking a flower, manipulate it in between its bill to get at the nectar, then casting the remains aside.

“Taking a rest from craning my neck looking up at the parrot, I noticed the ground below the tree was covered with leaves with small round holes (below). “Studying the tree more closely, I found that in fact most of the leaves had these holes, and it was explained to me by Craig Williams and Teo Siyang that these holes were made by the larvae of a bagworm moth (Psychidae), which are always under the leaves, wrapped in the circles of leaves which they cut out and fashion into a conical pagoda. I have circled in red two of them with the little cones (below). “I also found some berry-like fruits on the tree, which I suppose gave it the common name of Java Plum. “More on the tree can be found on Wikipedia LINK. 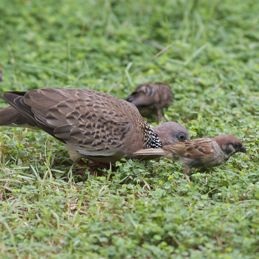