In April 2014, Goh Juan Hui encountered a Collared Scops Owl (Otus lempiji) fledgling on the ground among some low vegetation (above). He thought the owl was injured and needed help. He contacted Johnny Wee who suggested that he use a stick to get the fledgling away from the ground, away from lurking predators. Juan Hui did just that (below). With the owl perching on the tip of the stick, Juan Hui raised it up hoping to transfer it to a higher branch (below). But before this could be done, the bird flew off and disappeared among the trees. Well, it was not injured after all. It probably was on its maiden flight from the nest and landed on the ground. Out of compassion, many people will pick up such “helpless” birds and bring them home, hoping to care for them. But please do not remove the bird away from its nesting area LINK. At the most, place the bird away from the ground so that it is not predated by a stray cat or dog, or even trampled by passersby. The adults are around to care for the fledgling but they are hidden from view.

Once, a Little Heron (Butorides striatus) fledgling was thrust onto YC Wee to care for LINK. Someone had removed it from the nesting site thinking it needed help and brought it to me in a box. I managed to care for it for about a month, to finally released somewhere near where it was found LINK. Not sure what happened after that. Did it survive? Not too sure. Was it predated? Probably, sooner or later.

Most people do not realise that fledglings need to be taught how to look for food… who are the predators… and how to avoid them. The first week or so after fledglings is the time when the adults (parents) teach the young how to survive in the wild. In the absence of this, especially when we interfere with nature, the “rescued” bird will end up as lunch for some predator or other.

However, for injured birds and not those that landed on the ground during their maiden flight, you can contact BAR (Bird Alert and Rescue) Singapore hotline +65 81802082 for help LINK. 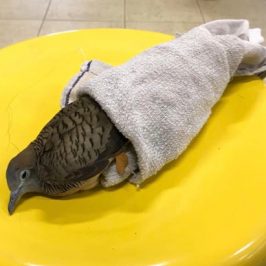