“I occasionally like to sit at the riverbank along Boat Quay during lunchtime. In early part of March this year, while sitting under a tree I heard the familiar call of a Blue-crowned Hanging-parrot (Loriculus galgulus) on top of the tree. I was trying to locate it before hearing another call coming from my right. Turning my head to the source, I immediately saw a female parrot perching at the lip of a tree cavity less than 2 metres away, answering the call from the tree top. I actually managed to take a photo with my hand phone.

“After a while, the male bird came down and both seem to be inspecting the hole before flying off. I went back again the next day and they were back again. I was now fairly sure they are either building a nest or already have one. “I came back during the weekend with my camera and pointed directly towards the cavity and sure enough the female was back and it went into the cavity for a fairly long period (above). “The male bird came after some time and called before both of them flew off (above). “I went again next week as I wanted to get pictures from a different angle. This time I saw a young bird sticking out its head checking the surrounding (above). It was fairly developed and I reckon would be fledging pretty soon. “The parents came back together this time and mom was feeding while dad assumes sentry duty (above, below). “After finishing her supplies, she was replenished by the male (below).” 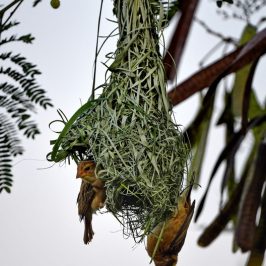