Anting is the phenomenon where birds make use of ants to rid their feathers of ectoparasites LINK. The ants release formic acid when aggravated, in this case when they are picked up and placed among the feathers of the bird. But birds have also been known to make use of other invertebrates as well as certain plants for the same purpose. We have posted a number of accounts with photographs of anting with ants as seen HERE. However Lena Chow has now provided video evidence of anting with tree sap. On 3rd April 2014 Lena wrote: “An unusual call had me looking out my window today, and I saw a pair of Common Flameback (Dinopium javanense) making what must be contact calls as they busied themselves in a tree opposite my house (see video below). The image above shows the male perching on the tree branch.

“I managed to video them separately and noticed that they were chiseling at the trunk and using the sap that seeped out, not for food, but for feather maintenance,” continued Lena.

The short video clip above shows the male chiseling at the trunk to get at the sap and then methodically applying it to his feathers. At the same time he is making his contact call. A longer clip of the female doing the same for at least two minutes is shown below.

Lena also found a clip on YouTube… apparently the Buff-necked Woodpecker (Meiglyptes tukki) doing the same LINK. However the author failed to realise that this was anting with tree sap.

The Common Flamebacks were extracting sap from the Tamalan Tree (Dalbergia oliveri). Native to Myanmar and Thailand, it was introduced to Singapore decades ago and planted along the roadsides and parks (below). The leaves are pinnate compound (below left) and the bark brown and flakey (below right). When the bark is damaged a colourless sap oozes out, which according to the literature, can cause contact dermatitis LINK. Obviously the flamebacks were making use of the chemicals in the sap to rid the ectoparasites found among their feathers. This account on the Common Flameback using the sap of the Tamalan Tree instead of ants during anting is a new local record documented by Lena Chow. With this post, it is hoped that photographers, videographers and even birdwatchers, will look out for this much ignored aspect of bird behaviour – whether anting using ants, beetles, bugs, caterpilars, wasps, millipedes, snails or plant sap. 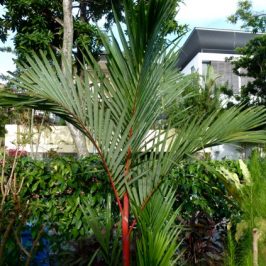