“The world order of 306 Thrushes’ (Turdidae) species is divided into nine families of which, Whistling Thrush’s (Myophonus) family consists of a very small group of two species. The Malayan Whistling (Thrush Myophonus robinsoni) is one of the two. (above, side view). “Out of the above, only the Malayan Whistling Thrush is endemic to Peninsula Malaysia and joins the prestigious rank with three other Peninsula endemic bird species (above, front view).

“This statistics certainly place the Malayan Whistling Thrush – a sub-montane (760-1770m a.s.l.) specialist in an exclusive class and deserves all attention, respect and protection this dwindling, precious species demands. “Stardust’s favourite roosting haunt was noted to be in a damp, deep, thick vegetated gully from which, upon dawn/ dusk or disturbed, the bird swiftly returned to.

“I had the opportunity to observe Stardust for several days. Only one occasion I heard a morning ‘dzeep’ call as the monotypic bird made a quick arrow dash across the road to forage in a forested hill slope of rocky surface, with a stream run off. “A largish bird with dark and blue spangles, Stardust’s plumage lacked the white-bluey spots above and on neck sides/throat in comparison to its larger size- blue caeruleus cousin. I had few images showing a bright metallic blue on wing bend as described in text. A useful identification pointer, here is one taken in correct lighting condition (above).

“Of special mention – in addition to the bird’s detailed descriptions to be had in Dr David Well’s references – Stardust wore a thin white eye line/eye ring surrounded by inconsistent white, minute macular looking spots like stardust as seen in the plates submitted.

“Stardust – a Whistling Thrush with its signatory yellow bill wore a blackish culmen ridge with hook at end of its upper mandible. It might suggest, apart from being an insectivore, the bird’s diet may extend further. “In good lighting, Stardust’s feathering shimmered in a myriad of geometrical, pineapple looking patterns I best describe over its plump, oval chest and belly (above).

“An opportunity was had to observe Stardust took a quick, evening bath in water catchment area of rocky slope. It then flew to perch on a tree branch, shuffled off excess water and preened. Time was 1723hs.

“Stardust’s day time playground was the forested hill slope and was observed to be rather territorial. While the presence of Rufous-browed Flycatchers Ficedula solitaris and Streaked-Wren Babblers Napothera brevicaudata were either ignored or tolerated, Laughingthrushes were not welcomed. “A notable behaviour of Stardust was the intermittent fanning out of its tail that opened and shut spontaneously. This action was observed whenever the bird’s curiosity/pleasure was aroused (above).

“A disturbing, abnormal behaviour was observed of an endemic bird living in the wild. Initiated, my follow up article will be a tell all – addressing bad habits, feral predation and conservation practice of this endemic species.

“Do join me in Part 2 to read the conditioned behaviour of Stardust-the solitary bird who got left behind, unknowingly courts death brought on by irresponsible acts of humans.” 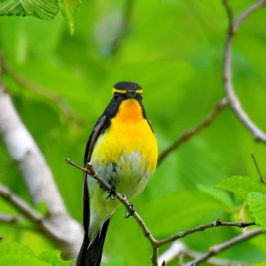 “While on the way back to Singapore from Bukit Tinggi, at the entrance of Zoo...