“The damselfly Aristocypha fenestrella (family Chlorocyphidae) is widely distributed throughout mainland tropical Asia and lives along clear, swift forest streams from the lowlands up to 1700 metres in elevation (Orr, 2005). “On 22nd February 2014, we had the privilege of observing this species at close quarters within the streams of Ulu Langat forest (Selangor, Peninsular Malaysia). The male may be recognised by its dark wings, which are black and purple with a metallic sheen (above). “The female, on the other hand, has extensive yellow streaks on its thorax and its wings are clear (above). A few females were seen to be busy ovipositing (laying eggs) within floating stems and branches on the side of the stream (above).

“A video clip of the female ovipositing may be previewed above. “Oftentimes, a possessive male would be watching over the female closely as it performs an entrancing dance, constantly flashing its fancy wings and displaying the prominent white limbs (above).

“Video clips of the male dancing in front of the female may be previewed above and below.

“As we were entertained by all this delightfully delicate damselfly behaviour, a serpent silently swam towards us and paused to pose for a picture (below). It was an attention-seeking Speckle-bellied Keelback (Rhabdophis chrysargos, family Natricidae) merely trying to steal the limelight from its Odonate neighbours.” 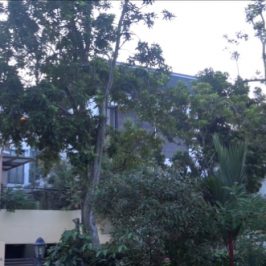 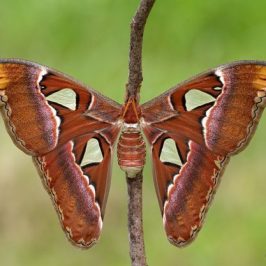