Based on observations made over 10 days between October 2009 and March 2012 in Perak and Pahang in Peninsular Malaysia, Dato’ Dr Amar-Singh HSS has finally published his findings (above).

Spiderhunters, as the name suggests, feed mainly on spiders. In addition, they take insects and nectar. There have also been casual mention of them feeding on fruits in the literature but no specifics, that is, until now. Amar’s evidence comes in his many photographs of spiderhunters in the act of picking the fruits and swallowing them.

Most of his encounters were with spiderhunters eating fruits of the Common Mahang (Macaranga bancana). These observations were made mostly at his favourite birding area in the Kledang-Sayong Forest Reserve near his base in Ipoh, Malaysia. Of the seven species of spiderhunters found in Peninsular Malaysia, he has photographs of Grey-breasted (Arachnothera modesta modesta) LINK (above), Yellow-eared (A. chrysogenys chrysogenys) LINK and Spectacled Spiderhunters (A. flavigaster) LINK (below) in the process of eating the ripe fruits of Common Mahang. He has seen but yet photographed the Little Spiderhunter (Arachnothera longirostra cinereicollis) eating the fruits LINK, but knowing Amar, he definitely will, in the near future.

The spiderhunters either picks a fruits with the tip of its long bill, work it back slowly until it is easily swallowed, or toss it in the air to catch and swallow it.

Another fruit documented is the Malayan Teak (Vitex pinnata), eaten by the Spectacled Spiderhunter. In the case of the Rambutan (Nepheium lappaceum), being a larger fruit covered with a tough and hairy rind, the Yellow-eared Spiderhunter was shown to be an opportunistic feeder. Only after a Blue-crowned Hanging-parrot (Loriculus galgulus) had removes a small piece of rind did the spiderhunter arrive to take bits and pieces of the flesh, and also the fruit juice LINK (above).

This publication clearly shows the importance of photographic (or better still videographic) evidence in credible documentation of birdwatching claims – as discussed HERE and HERE. 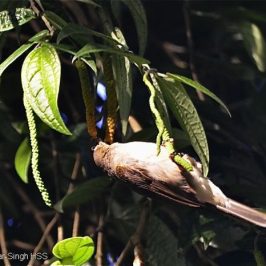