KC Tsang was in Costa Rica in February 2014 where he visited the Valley of San Gerardo de Dota and trekked up the mountain to the cloud forest at an altitude of 2,200-3,025 metres. There he managed to photograph the near-threatened and uncommon Resplendent Quetzal (Pharomachrus mocinno). It was a reward worthy of traveling halfway round the world lugging his camera (Nikon 1 V2, ft1, TC2, 300mm f/2.8) and tripod with him. The Resplendent Quetzal, in its green-blue-red-white-grey-black plumage is one of the most beautiful bird species in the world. In addition, the green feathers exhibit iridescence, turning green-gold to blue-violet, depending on the angle of view as well as the angle of illumination. The above image shows the female in all her glory. The male is much more spectacular, especially during the breeding season when he grows an extra twin tail feathers that may be a metre long (above, below). So delicate are these feathers that the bird falls backwards in order to fly off his perch so as not to damage them. When doing incubation and brooding duties during the daylight hours, the male sits in its nesting cavity in a rotting tree hole facing outwards. His long tail feathers curl round his body and over his head, sometimes exiting the nesting hole, giving the illusion of a bunch of fern growing out of the cavity.

The video above is by Lbon who recorded it at Mount Tetumas Cloud Forest in Panama on 23rd May 2011. 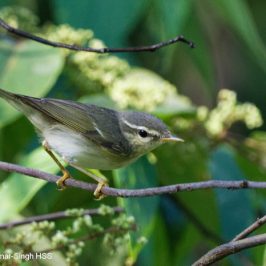