The Von Schrenck’s Bittern (Ixobrychus eurhythmus) is an uncommon winter visitor to Singapore, arriving from October to December. Some birds that are passage migrants continue to fly south after refueling, to return around March. These join up with the winter visitors to fly back north to their breeding grounds in SE Siberia, Manchuria, China and Japan.

The video above by Jeremiah Loei was recorded at the Pasir Ris mangrove at around 1830 hours when it was rather dark. This is the period when these bitterns are active. Being largely crepuscular, they are also active around dawn and sometimes during the day, especially when the sky is overcast.

The female is shown foraging along a mangrove stream. Obviously food is plentiful as the bittern is constantly picking up unknown organisms from the water. We know that it generally eats frogs, small fish, shrimps, isopods and insects and their larvae. What we do not know are the specifics of the organisms.

Towards the end of the video clip, the bittern is confronted by a large mudskipper (top). Obviously that mudskipper is too large for the bittern to swallow, but it would be interesting to know whether it will eat a much smaller mudskipper! Mudskippers are commonly found in mangroves and mud flats. They are gobies but have their eyes on top of the head, unlike in other gobies. They also have muscular pectoral fins that enable them to crawl on the mud. By flipping their body, they can catapult themselves some distance up into the air, thus moving forward rapidly. And unlike most other fishes, mudskippers can breath on land as it can extract oxygen from water stored in their gill chambers. At the same time they can also breathe through their moist skin. The above is an image of the Giant Mudskipper (Periophthalmodon schlosseri) which is probably the same species encountered by the mudskipper in the video.

During high tide, they take refuge in deep burrows in the soft substratum to avoid predator, breathing air from the trapped air pocket as the water would be very low in oxygen. 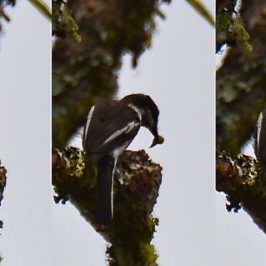 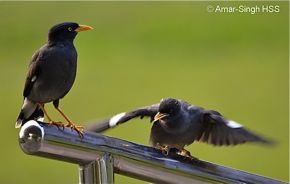 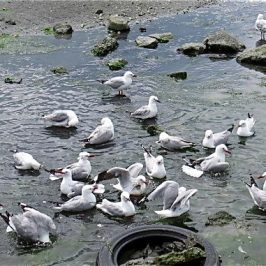