Courtship
For the more than a few mornings in May 2013, a pair of Spotted Doves (Streptopelia chinensis) was heard duetting while hidden among a leafy branch of the Blue Mahang (Macaranga hyeni) tree that was covered with the scrambling Luffa plant (Luffa aegyptica) (above). The duetting started as early as 0730 hours and lasted from 5-10 minutes to as long as 40 minutes. When disturbed from their perches, they fly off to continue somewhere else. During evenings they were not in the tree. Both doves were perching close together, the male(?) singing all the time. The female rarely sang. Obviously they were in courtship mode – see also HERE (above). Nest building and egg laying
In due course they constructed a simple nest of flimsy twigs and other materials – see also HERE. On the evening of 18th May, a dove was seen in the nest (above). Its partner was not around. The female had probably laid an egg and an adult was incubating it.

Two days later a call was heard at around 0900 hours. A dove was perching nearby. After a while it flew into the nest (above). A few moments later the dove in the nest flew off and the one that flew in started singing. This was obviously an incubation shift change. The next morning a series of songs were heard, followed by another at around 1030 hours. This time one dove flew out of the nest and another flew in. Hatching of the egg
At 0730 hours on 31st May, the dove in the nest responded to a song from outside. One hour later this was repeated. Half an hour after this second song, a dove was seen on the ground below the nest with a slender twig between its mandibles. It flew to the nest, inserted it and flew off. The other dove had flown off a few seconds earlier. Both adults were on the ground, leaving the nest unguarded This was one of two instances observed when the nest was left unguarded, albeit for a very while. Then suddenly both adults returned to the nest, one with a twig. And just as suddenly one flew off with half an eggshell, landed on a branch of a nearby tree and dropped the shell. After 13 days of incubation the single egg in the nest had hatched. Chick predated
On the morning of 5th June, the nest appeared unguarded. Sensing that something was amiss, I gently shook the branch where the nest was. Faint cries were heard, indicating that the chick was alive. A Changeable Lizard (Calotes versicolor) was seen moving around nearby. At around 0947 hours an adult arrived and sang, remaining on the branch of a nearby tree. It flew to the ground and moved around until 1020 hours when it flew to a branch and sang again. This was followed by another song ten minutes later. The nest remained unguarded.

At noon when no adult returned to the nest, I decided to investigate. When the branches were moved slightly, breast feathers floated down. On looking into the nest, a large chick was found dead inside, its head missing. It was covered with semi-plume feathers. The chick was only 6 days old (top).

I suspected the resident Plantain Squirrel (Callosciurus notatus singapurensis) was responsible – see HERE. An adult must have tried to frighten off the predator and in the process its breast semi-plume feathers were shed – see HERE. The Changeable Lizard was lurking around possibly because of the presence of flies around the dead chick. Nest details
As the nest was abandoned, it was retrieved for examination (above). It was a deep cup untidily constructed from various plant materials. The nest was 15 x 10 cm at the top and 8 cm thick, the pile narrowing down slightly towards the base as the nest was lodged in the fork of a branch. This is contrary to a flimsy flat platform of twigs as described by Baptista et al. (1999), Gibbs et al. (2001), Wells (1999) and Wells & Wells (2001). The nest had no lining.

There were a total of 244 pieces of nesting materials, mostly of twigs and pieces roots, grass rhizomes, etc., each from about 5 cm to one as long as 25 cm. This would mean that an adult made that many trips in the construction and reinforcing of the nest. These pieces were not firmly locked together and only minimum efforts were needed to dismantle the nest. Discussion
According to Wells & Wells (2001), among pigeons and doves, the male collects the nest materials and hand them to the female to assemble the nest. Furthermore, the male incubates the eggs for a portion of the daylight hours while the female incubates through the night. This has been observed in the Pink-necked Green-pigeon where the sexes are easily differentiated LINK and LINK. In the case of the Spotted Dove where the sexes are not easily differentiated, I am assuming that the species behave similarly. This would mean that the adult flying into the nest during the mornings was the male. 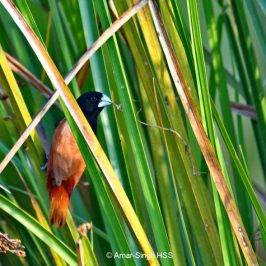