“The Chestnut-headed Bee-eaters (Merops leschenaulti) are the favourite bee-eaters for my wife and myself (above). They are friendly, visit our home twice a day (non breeding season) and have a delightful personality. “Was out today and came across two different nesting sites 0.5 km apart (above). One had 4 nesting holes, the other 6. All were either freshly constructed or in the process of construction.

“Recent prior observations of nesting holes in my region suggests that nesting holes are often constructed around December to February: “Nest construction was carried out by one bird with the other playing a watching (security) role from a nearby perch or on the ground beside it (above, below). “Notice the bird on the right has the classical mature dark tip to the wing primaries but that the ‘partner’ does not and looks immature, like a first year bird. Even the tail is not as well developed. Most of the work in nest building was done by the mature bird, with the other observing or doing ‘watch out’ duty.

“Bee-eaters in general are known to exhibit cooperative breeding with non-breeding individuals helping ‘family members’ and assist to build nests and raise their brood. I am not aware of this behaviour documented in Chestnut-headed Bee-eaters. So I am uncertain if this is cooperative breeding with a 1st year (ex-child) supporting the new nest or this mature adult has taken a 1st year as a mate.” 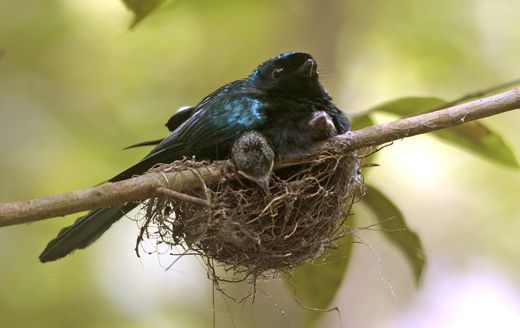