“I had an unusual experience this morning, it already being a usual bird day. I was watching a large number of birds in a mixed foraging party when my attention was directed to an adult Yellow-vented Bulbul (Pycnonotus goiavier). I often try to observe Yellow-vented Bulbuls that live in secondary forest as they behave somewhat differently from the urban dwelling ones.

“This bulbul was feeding but looked distressed.

“Looking up I saw the partner caught in a large spider web with the wings, tail and head entangled (above). It was about 9-10 meters above, so there was little I could do to help. Fortunately as I watched it flexed and extended the body and managed to break free after a few minutes and fly to safety.

“It is unlikely that the Yellow-vented Bulbul was attempting to take the spider as prey. It is more likely that due to the very large volume of birds feeding actively in a ‘melee’ the bird accidently flew into the web. I have seen smaller birds investigate spider webs and occasionally get covered in silk or transiently trapped (Brown-throated Sunbird) but not see a bird of this size get trapped. “A quick review of literature and a web search showed that this is not that uncommon.

1. The best article is by Daniel M. Brooks. Birds Caught In Spider Webs: A Synthesis Of Patterns. The Wilson Journal of Ornithology 124(2):345–353, 2012 LINK. He reports a review of the literature which showed ‘Sixty-nine cases of birds representing 54 species in 23 families were reported trapped in spider webs’. Birds as large at the Laughing Dove (Streptopelia senegalensis) were reported entangled. Brooks suggests that spiders, particularly the orb-weavers, are opportunistic predators of birds trapped in webs.

3. The spider responsible in this case is most likely a Nephila species Spider (Golden Orb-Web Spider) which is common at this forest reserve (above). Articles on this spider:
a. Malaysian Spiders LINK.
b. An article on Nephila species (Golden Orb-Web Spiders) LINK states that they are ‘the largest known web-spinning spider, and make the largest orb webs large enough and strong enough to accidentally catch small birds.’
c. Another article LINK says ‘The web is so strong and sticky that fishermen use it to make nets. They bend a branch into a teardrop shape and wave it back and forth through the golden silk orb weaver’s web.'” 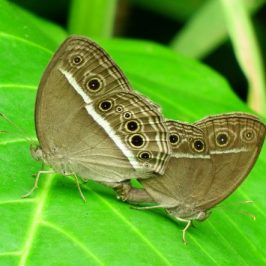