“This is a rather long post to describe an unusual and poorly described frugivorous behaviour (fruit feeding) of the Asian Brown Flycatcher (Muscicapa dauurica).

“Asian Brown Flycatchers are common winter migrants and the ‘classical’ feeding style is described as a ‘sallying insectivore’ i.e. feeds on tiny insects especially by spotting then from a branch, then flying out to catch them and retuning often to the same perch. It does eat larger animal prey and may pick up caterpillars [see “Wells, DR (2007). The birds of the Thai-Malay Peninsula: Vol. 2 Passarines” and “Philip D. Round, George A. Gale & Warren Y. Brockelman. A comparison of bird communities in mixed fruit orchards and natural forest at Khao Luang, southern Thailand. Biodiversity and Conservation 2006:15”. Article available HERE – for more details].

1. An article from Japan: ‘Yoichiro Takanose, Tomohiko Kamitani. Fruiting of fleshy-fruited plants and abundance of frugivorous birds: Phenological correspondence in a temperate forest in central Japan. Ornithol. Sci. 2: 25–32 (2003).” In the article they list the Asian Brown Flycatcher as a “frugivorous bird species observed from May 1995 to April 1997 at the study site’. Article available (pdf download): HERE

2. One video observation by Josep del Hoyo from Southern Thailand on 7th April 2008, showing an Asian Brown Flycatcher feeding on berries. See: HERE (you have to slow down the video to see the fruit feeding at the beginning)

“Apart from these two, I am not able to find any other references in local Malaysian bird literature or international publications. I am of course not able to search every image uploaded especially if the activity in the picture is not labelled.

3. On 31th October 2011 I documented an Asian Brown Flycatcher feeding on a Blue Mahang or Macaranga heynei (formerly known as M. javanica) [Image available on OBI].

4. Today, 20th December 2013, I was fortunate to see 3 feeding episodes on the fruiting Common Mahang (Macaranga bancana). Images are limited in quality but clear. The ripe fruit is taken whole and swallowed without crushing.

“There is now sufficient evidence to state that fruit is part of the diet of the Asian Brown Flycatcher.

“List of birds feeding on the fruit of the Common Mahang (Macaranga bancana) (Updated 20th Dec 2013): 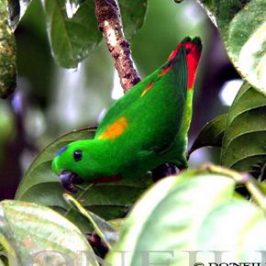