The Kledang-Sayong Forest Reserve in the Malaysian state of Perak is a mixed secondary-primary forest. In mid-December 2013, Dato’ Dr Amar-Singh HSS located a fruiting Common Mahang tree (Macaranga bancana) along a trail through the forest. This is where the tree thrives as it needs light to fruit.

This is an excellent “bird tree” as the fruits attract many species of birds LINK. Feeding of the fruits is always competitive as the more aggressive species will chase away the timid ones. A good example is the Narcissus Flycatcher (Ficedula narcissina elisae) that was repetitively chased away by the Mugimaki Flycatcher (Ficedula mugimaki). Two years ago Amar documented more than a dozen species of birds attracted to the massive amount of deep purple-red fruits (10-11mm in size) covering the branches LINK. Yet another flycatcher seen was the Narcissus Flycatcher (Ficedula narcissina elisae) (left). This is a variant of the Narcissus Flycatcher which is called the Green-backed Flycatcher (Ficedula elisae) in the 2011 Checklist of the Birds of Peninsular Malaysia. Oriental Bird Images Taxonomic Notes state: “The subspecies elisae is sometimes treated as a separate species Green-backed Flycatcher Ficedula elisae. However, a recent study recommends retaining it as a subspecies of F. narcissina. Töpfer, T. Systematic notes on Asian birds. 60. Remarks on the systematic position of Ficedula elisae. (Weigold, 1922). Zool. Med. Leiden 80-5 (12), 21.xii.2006.”

5. Emerald Dove (Chalcophaps indica) – possibly fruit feeding as the bird was seen in the tree. Furthermore, according to Amar:

a. This was in the deeper jungle location and there was little space on the ground for it to do its conventional ground feeding (definitely none at the base of the tree).
b. It returned to the tree “purposefully” while I was there.
c. Emerald Doves are known to feed on “fallen” fruit (Wells 1999).

However, Amar had “no direct observation of fruit feeding in the tree but felt this was worth sharing for more detailed observation. No images as it was very shy.” 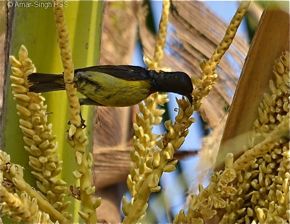 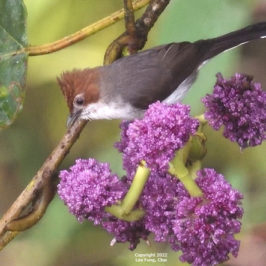 Poikilospermum suaveolens is a woody hemi-epiphytic liana (woody vine or climber) found in the rainforest of... 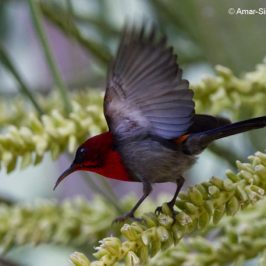 “An image to try and show the rump of the adult male Crimson Sunbird (Aethopyga...