“My helper was reaching out to a luffa fruit (Luffa aegyptica) that was scrambling over the limau purut tree (Citrus hystrix) the other day when she noticed a small colony of bees attached to a twig nearby (above). She immediately walked away as the bees were about to attack her.

We managed to chase the bees away and were surprised to find a white, more or less flat oval structure attached to a slender twig where the bees were (below left). Curious, I removed the twig to examine it closely. It is a single honeycomb (above right). The upper portion built around the twig is 33 mm long, 24 mm wide and 10 mm thick. The structure consists of 2 rows of elongated, empty hexagonal cells, each about 10-12 mm long. These cells are apparently used to store honey. The rest of the comb hangs down from the upper portion, 30 mm long and 25 mm wide, with a rounded base. It is 6 mm thick and made up of two layers of smaller normal cells placed back to back. These smaller cells are for brood rearing.

On enlarging the images, I was surprised to find traces of eggs (or are they young larvae?), one to two per cell.

The entire comb is made up of beeswax. Worker bees apparently chew on the waxy secretions from the wax glands found on their abdomen and shape them into these hexagonal cells that make up the honeycomb. Searching through my photo archive, I located an old image of the dwarf honeybee comb photographed from my garden (left). The entire comb is covered with layers of worker bees, one over the other, that provide an effective shield to the comb and their developing larvae from the rain. The colony is a mass of bees that tapers to a narrow point at the base.

Apparently, dwarf honeybees are less aggressive then their Asian hive bee cousin (Apis cerana), which is a very common honeybee in Singapore. The former is more defensive than offensive but will sting if someone comes too close to the colony. The sting is supposed to be less painful than those of the other honeybees but will cause a more prominent swellings on the skin. 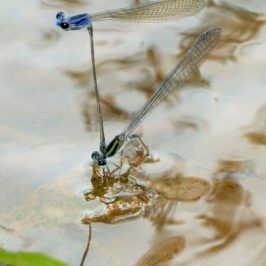 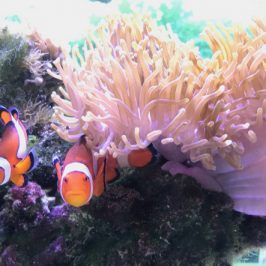