“Being ground dwellers and building their nests mainly on low grounds, parenting Blue-winged Pittas (Pitta moluccensis) face a greater challenge in fledging their chicks on a per clutch basis.

“The greatest direct concern of faunal predation is caused by predators such as stray dogs, feral cats, reptilians, monkeys and birds/raptors that prowl and patrol nesting areas; thus finding eggs and sushi of pitta nestlings to be easy pickings.

“Predators endowed with acute sense of smell helps hunt and survive in the wild. Equally too, are their sharp hearing to detect sounds and movements. Many have day-night vision capabilities that hunt at night when preys’ guard is down and asleep.

“Most of these acute sensory functions apply to Pittas too. The presence of humans is detected by emissions and secretions in the form of body excretions, odour and sweat. External usage includes deodorants, perfumed/fragrances and insect/leech repellents too.

“When humans choose to spit, urinate and defecate in forests knowingly or unknowingly, create potential food trails for predators initiated by their human excretory odours.

“While open air toilets may be a personal preference to some, why not respect living forests, keep them cleaner by using public toilets where available, prior entering a living domain of the wild?

“Another factor worth mentioning not understood years ago was an encounter with an experienced bird guide. He directed a personal question to ladies in a mixed group. Politely he commented with downcast grin, to be expecting a lower bird count should there be menstruating ladies present that day… sorry guys!

“Footwear (leather/pvc/rubber) used and trodden on forest floors leave behind trails and odour detectable by predators. As such, it is never a good idea for birders/photographers to observe nestlings too closely by approaching nest site on foot; not realizing one would actually be leading predators directly to the chicks.

“This would explain in Part 8 article, why I exercised self-restraint by drawing an imaginary ‘NO GO’ zone near nesting site to also minimize stressing parenting birds with my presence.

“Apart from bird poachers being human predators that directly compromise reproduction process of birds, other humans’ presence in the form of naturalists, hobbyists (birders and photographers included), scientists and visitors to a degree, unknowingly and indirectly lead to nest predation by prowling wildlife of the forests. “Pittas don’t make good songsters. While poaching appears not to be a rampant practice in P. Malaysia, I encountered an incident in one of my birding outings.

“I was alerted by the calls of a sub-adult, Blue-winged Pitta. The bird having been confiscated several months ago was located in a holding area and cage sharing with other bird species in a sandy pit (left).

“I negotiated an appropriate habitat and quick release of the bird species. It was too precious to be destined as an educational show piece, locked up in Wildlife Forest Department of Malaysia.

“As birder-photographer myself, one has to admit that there will always be some form of disturbances and a compromise the minute one enters the forest. What sets one apart from the ‘good seeds and the husks’ is, the responsible one that makes all efforts to minimize the impact of disturbances and execute pertinent observations at best with least stress to nesting birds, giving top priority and every opportunity for parents to fledge their young possible.

“As human observers in forests, we need to be aware that we are also being watched at by primates. With keen eyes, these pesky monkeys are also watching our movements and where we direct our optics and cameras. So too are intelligent, opportunistic bird scavengers like Crow (Corvus) species. They will be curious to follow up and investigate after observers leave the site.

“Now that I have tried to explain how Homo sapiens can be their own worst enemies and that of the pittas, I am comfortable to put the predatory ratio of Predators in the wild v. Homo sapiens to be 50:50.

“While one cannot control completely what wild ones will or will not do, Homo sapiens can increase the chances of seeing successful fledging by observing the do’s and don’ts, using common sense to observe and indulge in good birding and photography practice.

“Showing disrespect, disregard welfare of wildlife-birds, treating them like inanimate subjects just won’t do. Being overzealous with the art of perfecting photography, let chicks go hungry at the expense of adding joy to a new bird species count- somewhat to stamp collecting and enriching camera producers, breeding birds beg to be left alone. That is the best return, good deed favour a photographer can do.

“The secret to surviving beyond a decade- one needs the undying passion to yearn, learn and participate more. The many behaviours these birds will show by spending time to watch, listen then follow up with photography; to learn bird science and ultimately to protect these avian creatures through the advocacy of sustainable practice in bird conservation and habitat. Then…. put them in writing to not only to educate and contribute but self-help in keeping Alzheimer’s disease away.

“During my first six days (24-29May) of observing Scarlet and P10 parenting their young behind my camouflaged drape hideout, a couple of incidents took place.

“A Black Kite (Milvus migrans) suddenly flew into forest and took to my 10’Oclock direction. Before raptor could comfortably rest on a branch, suddenly the territorial Large–Tailed Nightjar (Caprimulgus macrurus) flew out from nowhere, swooped down and attacked the potential predator, sending it to flee, with the resident nightjar in hot pursuit behind and out of the forest.

“On the sixth morning, I was surprised by an unusual predator on the prowl never encountered before.

“As I sat motionless and quiet behind camouflaged drapes, a leopard looking cat with a lengthy body –perhaps a hybrid approached. The prowler pussy footed towards me, to enable this hand shot in slow motion. A rare, wild cat species (below left)? “This highly and potential predator froze and stared, wasn’t quite sure what/who was behind the drapes, until I staged a sway. Hell broke loose, sending the spooked, feline freaking and darting out. Subsequently, I heard some feline growl outside the forest. Perhaps the same met its feral cousin and adversary.

“Village feral cats are never far away. Here is one seen stalking at the edge of a fruit plantation forest edge (above right). “The evergreen monitor lizard is also a commonly seen predator that lurks at forest edge and nearby streams (left).

“Having documented chick feeding and faecal sacs removal by parenting birds, I decided to give pitta pair a break from my six days of observation, took an afternoon off on 29th May and left town.

“I have heard of birders ‘baby-sitting’ nesting sites but have not read or anyone shared their observation routines or high success rates. As such, I am unable to advocate such a practice.

“Unless an official, scientific monitoring of rare species or undocumented observation is called for intensive monitoring (24hour watch), I think is best leave to Mother Nature. Humans are not designed to be natural babysitters to nesting birds.

“Having taken all precautions to observe nesting of Scarlet and P10 – pair of Blue-winged Pittas safely, I can but only throw caution to the wind, the other 50% probability of faunal predation and accept Murphy’s Law.

“I returned from an overnight trip and made a beeline to check on the nestlings’ progress on 30th May.

“Join me to read Part 11 for the climatic phase in nesting of the Blue-Winged Pittas.”

“Are there detrimental effects to the regulation of water levels in the three ponds? Over... 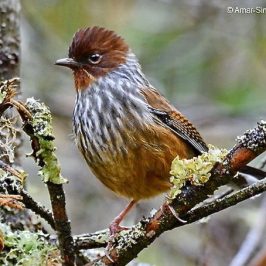