“The first successful, feeding photograph came at 0915hs from female parent named – Scarlet. A vinetting shot taken about 30ft (9m) away from my hideout, using Fieldscope x30 magnification –no camera zoom is shown here (below left).

“I had better opportunities photographing Scarlet. She was more focused and exhibited urgency in getting to feed the young, though I suspected my presence was detected but ignored. “P10 – the male also shared feeding duties, but more concerned about zealously protecting his interests. My presence was ill tolerated. He would rather carry on disqualifying me with alarm calls or chose to fly perched above or behind me and squawked, ‘I found Ya..!’ thus, sending me for more coffee breaks.

“Feeds consisted mainly of earthworms of different sizes collected in beaks and portioned to the chicks (above right).

“A horizontal twig across the entrance of nest appeared to be common platform to perform their parental roles. “Here, Scarlet perched and waited for chicks to present their rear (above).

“The maturity of a breeding female bird is shown here with bright, scarlet vent as she stooped to pluck faecal sacs (below left). “The following sequential images extracted from video and cropped a little, showed faecal sac extraction followed by flight of Scarlet (above right; below; below-left). “I had the opportunity to observe faecal sac being discarded by one of the parenting birds one evening. The sac dropped and burst on a hot, cemented path, resulted in a white, splashed stain that solidified instantly (below left).

“Nestlings had black, spiky looking feathers. Sensing arrival of their parents with feeds, chicks with yellow lined gapes and bright, orangey oral cavities and bills, made continuous soft, wheezing calls and extended their necks. They propped and sometimes scuffled for best positions. Nestlings were observed to remain quiet in between feeds to avoid predatory detection. “How many chicks are there in the clutch?

“Here is the closing shot (above right).

“How many will get the chance to fledge?

“Join me in the next critical phase of the nesting Blue-winged Pittas (Pitta moluccensis).” 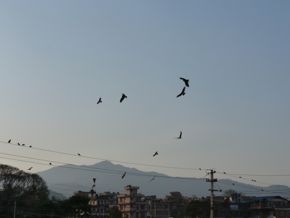 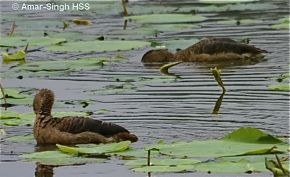 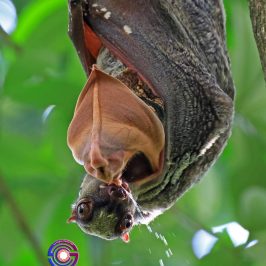