Red Junglefowl Hen Misses Her Chicks
“It is uncommon to hear the distress calls of a hen. But when you hear them you will know there is something going on. Trying to make sense of the situation when I heard it, I soon realised that the hen was missing her chicks. Even as my condo is a safe habitat for the birds, somehow they got separated. About 40 min later, I found one of the chicks with Lao Da the alpha male. Apparently the chick was also calling out for the mother. A short while later, it was happy ending as the whole family was reunited. The hen turned out to be Manis LINK.

View the edited video, recorded on 15th July at about 6 pm below:

Red Junglefowl Chicks In Horseplay
“Play is a common behaviour seen in animals, especially the young, apparently part of the process of learning adult behaviour. But it is recognised that adults play too. The video below, recorded on 8th October, shows 2 chicks of Cinta and Madu LINK, by now about 10 weeks old, indulging in horseplay.

“Besides play among sibblings in the same brood, there are also confrontations between chicks of different brood. Below is a video of two 6-week old chicks (out of three) of Putri Hitam taking turn to challenge an older chick of Cinta and Madu. Age and size do count and in the end the older chick prevailed. The video below was taken in the early morning of 11th October from the window of my bedroom. 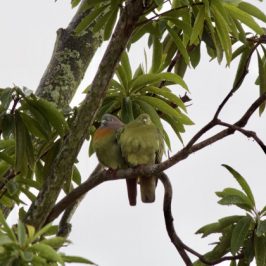