“The Striated Grassbird (Megalurus palustris forbesi) is an ‘immigrant’ from the Philippines, first noted in 1982 in north east of Borneo (Sabah). Since then spreading slowly down the island (left).

“One unusual behaviour I noted was a ‘wing flapping’ that I saw a number of times (below right). One episode is caught in the first part of the video below. The bird would flap one wing vigorously. I am unsure of the significance. “Another odd behaviour I saw was the disappearance of the bird into a large pile of cut casuarina trees/branches. See composite below.” 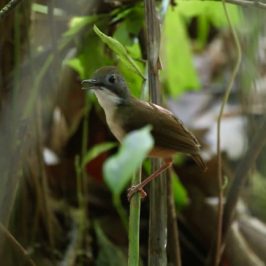