“Dr Wee Yeow Chin, who was a Scout in Raffles Institution during the 1950s, revealed some shocking secrets in a talk given to members of the Raffles Chapter of the Scouts’ Guild and their guests on September 21. “Though qualified as a botanist, and having retired as a lecturer in botany at the National University of Singapore, Dr Wee became fascinated by birds when House Crows (Corvus splendens) started nesting near his home. He watched the interplay of crows and their brood parasites, the Asian Koels (Eudynamys scolopacea – a species of large cuckoo) and was intrigued by how the male koel would provoke the pair of crows to chase him. During the distraction, the female koel would sneak into the crows’ nest to lay an egg. This would hatch earlier than the crow eggs, and the Koel chick would quickly dump the crow eggs out of the nest.

“Dr Wee started a website, the Bird Ecology Study Group (http://www.besgroup.org/) which quickly became one of the most popular ornithological websites in Asia, garnering over a million and a half unique hits.

“The intention, he said, was not just to record the numbers and species of birds, but to allow those with interest in the subject to exchange information on the behaviour of birds in their daily lives, because only by knowing what birds do can we really get to know them. This website quickly became an active forum in which enthusiasts posted their avian pictures, videos and observations.

“The information within it is kept current, and attractive, through the efforts of a pool of about 400 active voluntary contributors.

“During his talk, Dr Wee spoke of how Baya Weaver (Ploceus philippinus) males had to build elaborate nests to attract females LINK. And if the ladies were not impressed with what they saw, they did not hesitate to literally trash the poor guy’s efforts.

“He showed photos of barbet females who demanded pay before they would play LINK. If the males did not feed them, they would not consent to mate. Dr Wee also mentioned that just because birds had paired up did not mean that they did not sneak off for affairs outside. DNA tests had shown that very often, not all the babies in a brood had been fathered by the male of the pair.

“After regaling the audience with more stories in this vein, Dr Wee joined the attendees and their guests (who included RI staff, and members from other Chapters of the Guild) in a networking session in the school canteen. Dr Wee and Mrs Wee join RI Chapter President Christopher Ng (left)and Committee Member Kong Hoe Leong in the networking session. In the foreground are K. C. Tsang, a bird photographer and contributor to his site, and (back to camera) James Tow.

“When he was active in Scouting, Dr Wee had been a tester in Woodcraftsman skills.

“After the Separation of Singapore from Malaysia, when the Singapore Branch of the Malayan Nature Society decided to become a separate organisation, Dr Wee was the Founding President of the Nature Society (Singapore).

“He is also the author of several popular books on botany. These include: 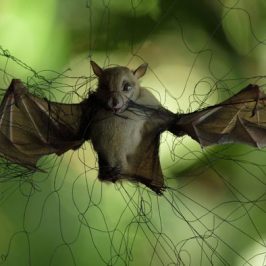 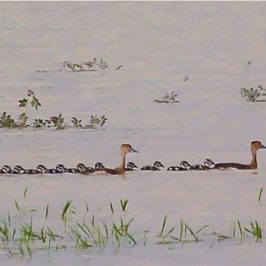 The above image by Lena Chow shows an adult Lesser Whistling-duck (Dendrocygna javanica) leading a...