The video clip below by Jeremiah Loei shows a Stork-billed Kingfisher (Pelargopsis capensis) manipulating a recently caught fish clamped between its mandibles. As it was bashing the fish against the branch, it showed signs of casting a pellet. The above image is a video grab at 24 seconds showing a brown pellet coming out of its mouth. This pellet is the undigested parts of the food it probably ate about half to an hour earlier.

After casting the pellet, the kingfisher continued bashing the fish for some time before finally swallowing the fish. Note that the fish is swallowed headfirst (below, left to right). Otherwise the spines can damage the bird’s throat causing death even. Had the kingfisher ate a fish earlier, the pellet would be white, consisting of fish bones, scales, etc. A black pellet was regurgitated by another kingfisher after it was observed eating a snail with blackish shell earlier LINK. Unfortunately it is not known what this Stork-billed Kingfisher ate earlier.

Normally, pellets are cast after a meal, not in the midst of another meal, as in this case. 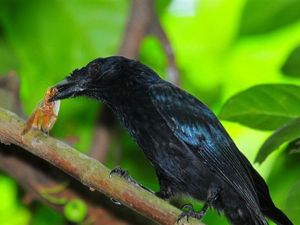 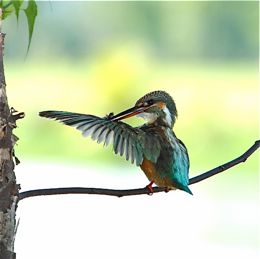