“I have never encountered a Short-tailed Babbler nor heard its calls/songs. I therefore found the article informative and interesting. “Having clarified the difference between a sonogram and a waveform, I have taken the liberty to produce a sonogram (above) using the sound file (HERE) extracted by Dato’ Dr Amar-Singh HSS.

“This sonogram contains very detailed information on the sound. Right at the bottom it shows the waveform of the sound similar to the one from Dato’ Dr Amar-Singh HSS. On the left hand side the y-axis is marked at intervals of frequency of 2.2 KHz. Within the pic amid a ‘sea of blue’, there are 16 ‘worms’, each represents a call within the song of 16 calls. The interpretation of the ‘blue sea’ and the colours of the ‘worms’ are explained in the small legend box at the bottom left corner – blue means no sound at the corresponding frequency, white means sound of the highest amplitude and red/orange are somewhere in between. Within the first 10 calls, it can be seen clearly that the pitch (frequency) drops rapidly from about 4 KHz to about 2 KHz within each call. These changes may not be apparent to those who are not born with good musical ears but are clearly revealed by the sonogram. For the next 6 calls, the drop is more gradual within the call and to the next call. On the right hand side is a tall black rectangular box with a horizontal bar near the bottom. The bar moves up and down if the song is played with the sonogram software. The position of the bar shows the frequency of the sound at the exact time position of the call/song. The length of the bar also varies according to the amplitude of the sound.

“These explanations may sound complicated. To show how the sonogram software works, I have produced a video, uploaded to Youtube (above).

“Incidentally, there is a slider bar just above the waveform indicating the exact time position as the song is being play.

“In the above video, a complete song of the Short-tailed Babbler is produced as a sonogram showing the changing frequency and changing amplitude (loudness) of the song as the bird sings. Source materials come from Jeremiah Loei and Dr Amar-Singh. “Another feature of the Sonogram software is that it can show a sonogram in 3D perspective. To illustrate it, Call A.jpg (above) and Call B.jpg (below)… “…represent the corresponding calls indicated in the attached Short-tailed Babbler Call Waveform (below). The z-axis in the 3D perspective indicates the amplitude of the sound.” 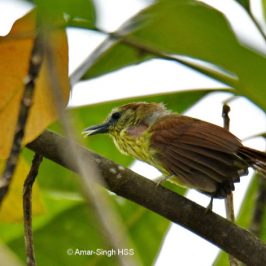 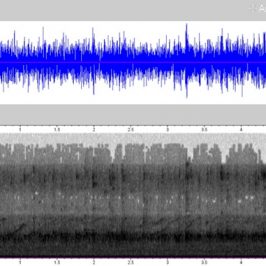