Jeremiah Loei’s recording of the Short-tailed Babbler (Malacocincla malaccensis) is one great solo rendition of this babbler’s song. The song, recorded at Singapore’s Venus Drive in late August 2013, lasted a total of 4 min. 16 sec.

Wells’ (2007, p366) interpretation is as follows: “…the full song … comprises a short, varied warble running directly into a trilling twitter (described as canary like) then to an even sequence of 5-6 loud, individually down-turning whistles and deliberate terminal cadence … tii-u, tii-u, tii-u, tii-u, tii-u, tii-u, tew tew tew tew tew tew. The tii-u sequence lasts about four seconds, the whole song about ten, and in early mornings it tends to be repeated in long bouts. At other times of day only fragments of the song may be given.”

Dato’ Dr Amar-Singh HSS undertook a sound analysis of one call section (HERE) using the Audacity software that gives a graphical representation of waveforms in the y-axis representing the amplitude of the sound]. “…the first part of the call is more like a chip, chip, chip rather than a pi pi” recounted Amar. “Actually there are three parts to the call, see image above, of one call section and audio extraction. [The call] starts with a chip, chip … then gets larger to a pchiew, ptchiew … and ends with the tii-u tii-u…” 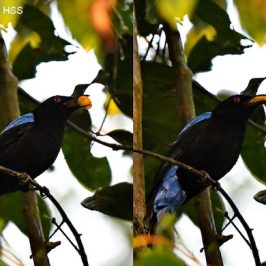