“It was up in Fraser’s Hill< Malaysia that I again witness this unusual behaviour of a bird that was aggressive with it's own image from a mirror. Any ways how can this bird adapt to developments from man which in a way is fast out pacing nature's very slow gradual evolvement. Anyways with its' very small brain size it thus is not able to understand what it is seeing is but a mirror image of itself. Thus this Chestnut-crowned Laughingthrush, " Garrulax erythrocephalus " is utterly confused, trying to claw at an opponent which is but a mirror image of himself and not able to inflict any damage to the mirror image of itself. If you were to look closely it would often stop at the side of the mirror and looked behind the mirror and not be able to find its' mirror image to fight with. Thus it would hop back to the area where his mirror image is and start all over again. I have flipped the mirror over on to the ground so that the reflective side will not be shown, hoping that no human being will use it again to confuse the poor creatures encountering it. KC Tsang
Fraser’s Hill, Malaysia
11th August 2013 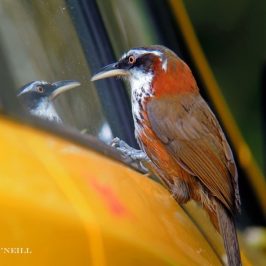 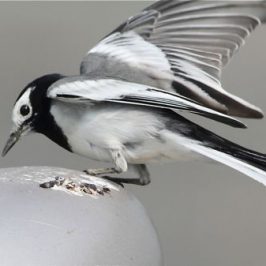 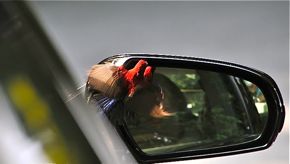