“Less than 2 months after my first encounter with fledglings of the Pied Fantail (Rhipidura javanica) LINK, I had a pleasant surprise. There was another nesting from the same parents – their second brood. Apparently, they reused the same nest that was built on a fork of a plant over a pond. The nest was about 1.5 metres above water level and about 5 metres from shore. “The chicks were lying low in the nest most of the time – making it appeared like an empty nest. It was only when an adult returned, usually with food, that the heads of the 2 nestlings that resided in the nest could be seen. The nestlings, probably 1 or 2 days old, barely had any feathers and eyes have yet to open. “Sharing here an interesting observation during feeding. With both chicks competing for food to be fed with their wide opened gapes, the adult would seem hesitant at times. “Which chick shall it feed? “The moth finally ended up in Chick A’s oral cavity. Is this to-ing and fro-ing of food from one chick to another a way for the adult to see which chick needs the food more? Or is it to tease the chicks to stimulate or train their motor skills? 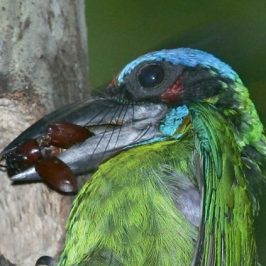