“As I sat in a Southbound KTM (Malaysian Railways) train preparing my Papua bird expedition trip in 2012, with copy of bird field guide at hand, I was approached by an astute, retired teacher. We became acquainted and he made a long, overdue and pertinent remark that made a deep, unforgettable impression.

“I wish a messenger of white feather would drift that remark to the respective School Education Review Commission Board or similar in developing countries.

“Here was what the regretting retiree said. ‘We have made a grave mistake in our education system. We left school knowing absolutely nothing about conservation’.

“Yes…, and we are all paying heftily for our ignorance. We are one of the few so lucky countries that have been endowed with natures’ beauty, pristine, tropical rain forests – millions of year old and home to immense species of flora and fauna. Yet… we don’t know, don’t care to know, learn and pay enough attention to treasure and conserve them until they are under threat from human greed and going, going … to be gone, some already gone.

“It is the lucky, conscientious few school leavers with interests in nature and wildlife at heart – who undertook time to nurture a passionate hobby – became more aware that received the rude awakening – that man and country have done nothing, little, not enough to repay the forests.

“Many were not brave enough to speak up loud or walked their talk. We spent too much time just talking and talking, taking and taking… and counting down species and currency notes at the expense of time lost to depleting forests and wildlife within.

“’Sir, you have just met the correct person. Here is a retirement gift for you. It is never too late to learn. We are learning everyday and this is the website I write and contribute into. Enjoy!’

“It has been a long time since I’ve seen a retiree smiled with so much pleasure and gratitude to hold a name card that reads the website’s address of ‘The Bird Ecology of Singapore’. (www.besgroup.org/)

“This is the satisfaction – to impart my observatory experiences to the correct people – that is keeping me writing.

“Now we begin our Birdwalk in Peninsula Malaysia to view birds kept as pets in kampongs (villages). Do preview some bird images viewed in my article ‘Avian Alcatraz’ posted in 2007 LINK. “More recently in a village, a pair of White-rumped Sharma (Copsychus malabaricus) was found in a neglected soiled cage. One bird lay motionless, presumed to be dead. Survivor looked miserable with missing tail feathers. I have not seen sharma species cage share. Was cage death due to a duel, a disease, or had owner’s pet hobby gone cold or gone away (above)?

“White-rumped Sharma is listed under the Protection of Wild Life Act 2010 (revised) Schedule 3 of Malaysia as a Totally Protected Wild Bird species. If caught in possession without licence, carries a penalty of up to RM50, 000 or jail or both under Section 60(1) (a) of the Act.

“Bird pet trade will remain as long as there is demand for caged birds. It only adds fuel to part-time poachers to practice their lucrative, clandestine activities.

“Bird pet owners hold a vital part in this equation and have the capacity to rethink, dismantle the equation about keeping birds as pets in cages … especially in small cages. (Germany has successfully outlawed any form of resident birds in small cages).

“To keep pace of current situations, I just returned from a bird pet shop visit posed as a prospective buyer. For RM2, a Eurasian Tree Sparrow (Passer montanus) or a Baya Weaver (Ploceus philippinus) may be had from an overcrowded cage for symbolic release offerings in Taoist temples. “Getting desperate was also a Yellow-vented Bulbul (Pycnonotus goiavier) thrown in.

“Of my purposed visit to view was no less than eight caged White-rumped Sharmas. Each varying in tail lengths, the price begins at RM500 from a 7-inch tailed bird and gets higher as the tail is measured longer and the songster sings sweeter. “Here is a well endowed, breeding bird taken in Cat Tien National Park, S. Vietnam in 2012 for comparison (above).

“Doesn’t he look healthy, beautifully glossed over when left to live in the wild? He had the chance to show off its tail, no less than twice the length of its body- such a rarity these days.

“As for ownership and vendor licensing of this species, it was kind of a grey area the employee in-charge seemed unsure, as he lowered his voice in Bahasa Melayu. I guess at the end of the day… money talks the loudest on one hand and plays pretend don’t know the other hand.

“The menace of stray cats – unwanted alike and dumped by irresponsible owners into National Parks and Botanical Gardens – remains unchecked. “Caught in a video-camera shoot was an in-house feline at the Botanical Gardens showing its prowess of stalk and stealth. The target – a pair of Spotted Doves resting on ground. Fortunately, their predatory responses were too swift for the feral cat. The birds flew to live another day.

“Here are the extracted sequential images (above, below).

“Ferals and pet felines are nest raiders and bird killers. The bored latter finds flying objects a curiosity to amuse and toy with if lunch/dinner wasn’t the desired menu.

“It doesn’t help if feline owners over-pamper their pets, allowing them the free run of the house and compound and let unsavoury activities go unchecked. Is there such thing as ‘Obedience training for Cats’?

“Join me in Part 2 to read how ‘bird educators’ prepare their winged merchandise for the bird pet trade in a coastal Javan village where once, waves roared and claimed villagers whole.” 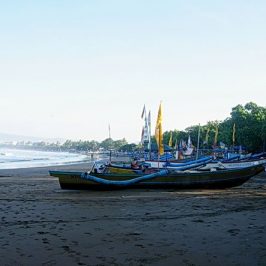 “The 2006 Java earthquake of 7.7 Ritchie scale, brought in a three metre tall tsunami...