“A pair of White-bellied Sea-eagles (Haliaeetus leucogaster) was seen at yesterday’s Singapore National Day Parade preview riding the thermals in plain view of the entire spectators.

“Initially one was seen, and returned a second time, with something caught and hanging by its talons.

“Subsequently a pair appeared as seen in this video below.

“Then during the aerial flypass they made their final appearance, a most significant National Day Parade for a raptor sighting.”

Note: One of the pair of White-bellied Sea-eagles was a juvenile, as represented in the image at the top, photographed by KC Tsang, but not at the parade preview. The Singapore flag borne by a Chinook comes from a past parade, contributed by Ashley Ng.

“A new brood of six Red Junglefowl (Gallus gallus) chicks was sighted at the perimeter... 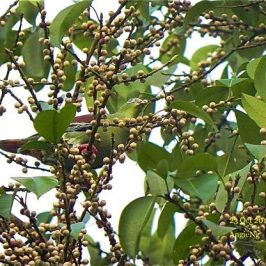