“I encountered the Purple Heron (Ardea purpurea) regularly at the Bishan Ang Mo Kio Park. Usually it was just after sunset during the wintering seasons. Most of the time only one was seen, either at tree-tops or near the water edge patiently waiting for prey. On one occasion two were seen near to each other. “For the first time on 9th July 2013, at about 7.20 pm (just past the sunset time of 7.16 pm), I had the fortune of witnessing a complete episode of the heron catching and consuming a fish. From nowhere, it glided to a graceful landing near the water edge. It must have spotted something as it adopted a hunting stance and walked nearer to the flowing water . After a while, it plunged into the water, with its wings spread out for balance. In a flash it struck its bill into the water and caught a fish (the exciting part was unfortunately not recorded in the video and a still picture of it in the water with the struggling fish in the bill was used as a fill-in instead) (above). It then returned to the dry land, almost dropping the catch but immediately retrieved it. Without trying to stun the fish, it just manipulated and aligned the wriggling fish before tilting the head slightly to swallow it. It then raised the head, straighten the neck to let the fish slide down its digestive system. It then returned to the water for the customary sip.

“This heron must be a resident here as it is not the wintering season now.

“Watch the video below.” 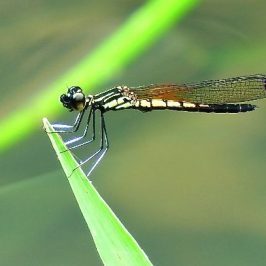