An earlier post on how a pair of Malaysian Cuckoo-Shrikes (Coracina javensis) was constructing their nest can be viewed HERE. “In late June 2013 at Fraser’s Hill, Peninsular Malaysia, we were delighted to observe a pair of Malaysian Cuckoo-Shrikes tending to their young. At any one time, either parent would be securely seated over the nest, which was constructed primarily with lichen (above, male). “Based on our careful observations from a respectful distance, there appears to be two chicks within the nest. Occasionally, either of the chicks would poke its head out from under the parent, resting on the edge of the nest, perhaps in desperate need for some fresh air (above).

“One morning, we were able to witness the return of a parent with a large green katydid in its beak. This insect was quickly fed to one of the chicks, after which the parent resumed its sitting position over the nest. A video clip of this feeding moment may be previewed above. “Within close proximity to this nest, a small troop of White-thighed Langurs (Presbytis siamensis) often ventured and frolicked amongst the trees. One morning, they came very close and were actively feeding on the shoots and young leaves of a Hibiscus shrub (above). Fortunately, these vegetarian monkeys did not bother the Cuckoo-Shrike family up in the treetops.

“A video clip of the White-thighed Langur feeding on Hibiscus may be previewed above. 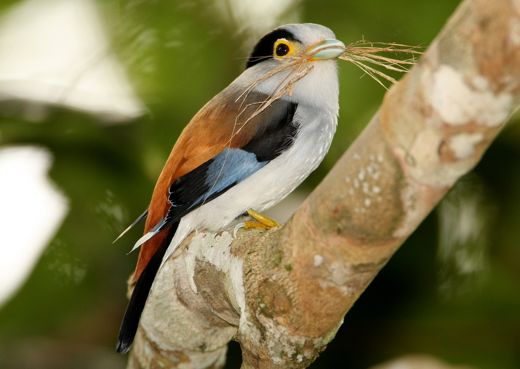