“The Central Nature Reserve protects our precious remaining rainforest. However, the forest is actually broken into many fragments, large and small. These fragments are separated by a number of man-made areas such as expressways, roads, golf courses, reservoirs, military installations, firing ranges, water-tanks, etc. Any separation, no matter how wide or narrow, may isolate populations of certain animals into small genetic pools that can lead to the eventual demise of species.

“Birds, in spite of their ability to fly, are no different. This is especially true for habitat specific species, especially those that stay in the lower storey of the forest; like our forest babblers (below: Abbott’s babbler). It is very important then that we afford full protection to our larger remaining forest fragments, especially those that still support areas of original rainforest. The northern MacRitchie forest is one such fragment that has been recognised as a vital core for this part of the Central Catchment Nature Reserve. “The birdlife in MacRitchie has been regularly monitored for more than 3 decades by a wide range of local and foreign birders and bird photographers. Scientific studies have also been carried out and I have personally conducted a few scientific surveys here since 1993. These studies will eventually be re-compiled for the BESG blog.

“This long-term relationship with MacRitchie has allowed us to have a more intimate knowledge of the avian fauna. There are many resident and migrant species that have been recorded here over the years but what is most important are the forest residents. These birds are restricted in distribution due to the dependence on the rainforest habitat. As we have such a small area of rainforest left in Singapore and this is constantly being chipped away, with no respect or reverence for the legally protected nature reserve status, many forest birds are now extinct and many more are declining. Internationally Threatened/Near-Threatened
“MacRitchie has five internationally near-threatened resident birds. four are forest specialists: Grey-headed Fish-Eagle (Ichthyophaga ichthyaetus), Blue-rumped Parrot (Psittinus cyanurus) (top), Red-crowned Barbet (Megalaima rafflesii) and White-chested Babbler (Trichastoma rostratum). The first two are locally scarce while the barbet is uncommon. The babbler may already be extinct at MacRitchie. The fifth internationally near-threatened species is the more adaptable Straw-headed Bulbul (Pycnonotus zeylanicus) (above), which is only found at the fringe of the area. “There are a number of other forest specialists that have been recorded at MacRitchie over the years and some of these are either classified as remnant residents or escapees by others. This researcher considers them all as regular or accidental visitors. These include Crested Serpent Eagle (Spilornis cheela), Cinnamon-headed Green-pigeon (Treron fulvicollis) (Internationally Near-Threatened), Little Green-Pigeon (Treron olax), Black-headed Bulbul (Pycnonotus atriceps), Ashy Bulbul (Hemixos flavala), Black Magpie (Platysmurus leucopterus), Black-naped Monarch (Hypothymis azurea) (below), Thick-billed Spiderhunter (Arachnothera crassirostris) and Yellow-eared Spiderhunter (Arachnothera chrysogenys). “Other non-forest visitors also occur at MacRitchie. The strangest was an Internationally Vulnerable Christmas Island Frigatebird (Fregata andrewsi) that soared over the treetop walkway one day!

“The proposed MRT train line that is supposed to run through the core of MacRitchie will be destructive to the birds, other animals and the entire forest eco-system. How can anyone propose anything in our precious nature reserves? Any risk of impact is simply not worth considering, especially with so little of our fragile forest left. Everything is mooted as a National Issue; water, health, housing, etc. Are our nature reserves and our biodiversity not National Issues too? We should show respect for our fragile natural eco-systems and stop chipping away at them for our own convenience!” 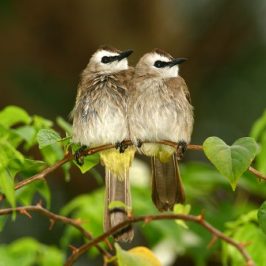 “I like animals and nature in general, even though there is at least one visitor... 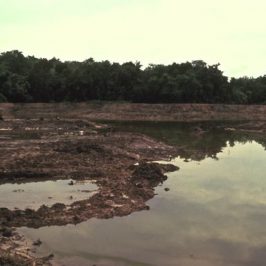