“I took a road less travelled early May 2013 and ended up at the buffer zone (Approx.1954sq.km) of Phong Nha-Ke Bang National Park in North-Central Vietnam (above). “Situated in the middle of the Annamite Mountain Range, the gazetted Park (Approx.857.5sq.km) comprises karsts and limestone outcrops. Shrouded in thick forest canopy, some of regenerated forests once pristine and virgin, was torched and destroyed by Napalm and defoliants – ‘Agent Orange’ (Phenoxy-herbicides) during the Vietnam War (1965-73) (above left). “Mother Nature has been kind and compensating to the Vietnamese populace for the past several decades. The labyrinth of caves and grottos discovered within the park wrote Vietnam a place in the UNESCO World Natural Heritage listing. Ecotourism came knocking on its door with no shortages of glossed over brochures to whet the appetite of local and foreign tourists alike (above). “Unlike the rich, fertile, delta flood plains of the Mekong, the unfavourable soil content here poses a challenge to farmers along the buffer zone of the Nature Park (above). “Villagers inadvertently relied heavily on the tourism trade and whatever forests’ produce that could be found useful, edible and profitable as in bird pet trade (above left and above right = Chinese Hwamei).

“My visit was purely to ascertain bird populations or what’s left of it and to feel, understand the ‘pulse-psyche’ of Vietnamese people from a different perspective.

“I was hopeful to meet up and observe some bird endemics and rarities. Apart from communication difficulties, coupled with bad festive timing and unfavourable weather, I found myself severely and logistically disadvantaged.

“However, there were several uncommon observations worth noting over a nine day period of my visit. Here are some of them. “In a fallowed crop field, a pair of Red Junglefowl (Galus galus) was seen foraging. The male shown of this region is with prominent, large white ‘ear patch’ (above left).

“I was surprised a hen could fly perched (above right).

“As I settled into the local environment and moved about in motorbike taxis, I had the opportunity to explore more on my own.

“At the edge of the forest, a fallowed crop field nearby was buzzing with flying insects/termites after a relentless heavy, morning rainfall. When reduced to heavy drizzle, a feeding frenzy of some bird species and a fauna species were observed. Here, no less than three Chestnut-winged Cuckoos (Clamator Coromandus) hawked flying insects, prancing from tree to tree branch like Birds of Paradise (below left). “A curious, drenched Yellow-throated Marten (Martes flavigula?) came out for a quick inspection on a trail forest edge and was caught on camera (above right).

“My birding time at Phong Nha-Ke Bang National Park was soon running out. Having seen little prior and desperate in the final hour, I resorted to digiscoping birds with shoulder-chin hugging an umbrella in heavy drizzle. “As I turned a corner to face the field, I was surprised by four male Red Junglefowls (Galus Galus) out in force, foraging along the edge of the field. All of them were in eclipsed plumages and there was not a female in sight! Here is a foraging image taken in the rain and extracted from video (left).

“Perhaps….. these males were too shy to show themselves during their ebb. Perhaps too… it accounts why bird observers /photographers don’t get to see/photograph these birds in eclipsed plumages as often as when they are at their best flamboyant and colourful looks. Apparently these birds breed all year round.

“Do notice the absence of hackles, all-blackish crown and neck, limped, shrivelling looking comb and lappets in male eclipsed plumage in these two images (below). “When food abundance flew suddenly from ground after a dry spell, these males didn’t care if they got drenched in rain or who was looking at them. “Seen here and caught in video- camera is one chasing after winged flying insects/termites in the rain. Here are the extracts (above).

“Do join me for another bird observation at Phong Nha village- a one road sleepy hamlet stirred awake by dusts from tourist buses that chased caves up road and bear witness the remnants of an ill unforgotten war.” 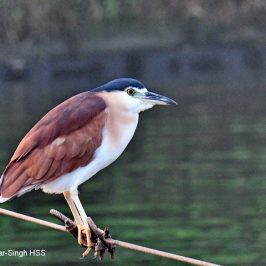 We are indebted to Richard Foster who was aware of a wintering Rufous Night Heron...