“Remember the Chinese Master ‘Kung Fu’ movie series where his pupil-Grasshopper would listen intently to his instructions?

“On one occasion, the Master noticed his pupil was kind of distracted over a buzzing housefly that refused to leave their table.

“Master Kung Fu in showing the art of lighting speed over visual, caught the ill fated fly with his pair of silver chopsticks, sending Grasshopper to jaw dropped and blinked in bewilderment.

“The answer came in a photographed shot of this female who decided to exit her roost to investigate what was buzzing at her front door (below let).| Let’s call our birdy pal, ‘GLORIA’ “The rest of other images that followed were extracted from my video. They speak volumes for themselves in ‘Kung Fu’ style.

“The image above-right shows Gloria staying focus with her eyes on the insect and following the insect’s flight path.

“To get a better visual grasp of the insect which appeared to look like a bee/fly, she crept stealthily further out from the entrance cavity and took to a strategic position of preparedness (left). “The above images show how Gloria took on the insect with her forward, lunged strike and enormous beak (top row down, left to right). In slow play forward, I discovered to my surprise, she actually caught the insect under her hooked upper mandible.

“It was too fast to be seen on normal video play back which saw the winger made a quick fly pass and narrowly escaped the jaws of death (bottom row right).

A disappointed Gloria saw her snack flew away and subsequently, she retreated into the tree cavity (below). “Brown Barbets lack the endowment of rictal bristles that aid in trapping insects like the frogmouths. They appeared to have learnt to make up loss by applying ‘Kung Fu’ stunts in their own front yard, as alternative survival skills.

“The hooked bill I would have thought, based on the usage of chopsticks principle, was not quite applicable for such purpose and has added to Gloria’s disadvantage.

“Well… the bird did try.

“Another antics these 20cm barbets I have observed and came at no surprise, considering they came from a family with stylish ways and personalities, could be read and seen in final Part 5 article of these ubiquitous birds.” 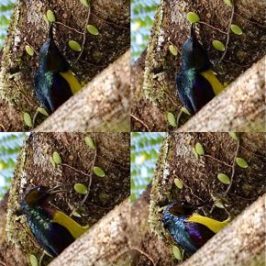