“During a pleasant morning walk 19th May 2013 at Lorong Halus with Simon Day and his two sons, who are doing a Big Year in 2013, we came across an unfamiliar species building a nest. “We saw a ‘funny’ black-headed weaver collecting grass near the ‘Little Grebe”-lake, obviously some African escapee. It flew into some branches overhanging the lake, and Mark took a few snapshots with his compact. There was a bird photographer staking out the nest. He said the bird was alone, he had not seen the female.

“Consulting Handbook of the Birds of the World Vol 15 and Birds of Africa south of the Sahara by Sinclair & Ryan (2003) after we got back, the bird appears to be a Golden-backed Weaver (Ploceus jacksoni) from East Africa, a male in full breeding plumage. According to The Avifauna of Singapore (2009) this escapee has not been recorded in Singapore previously. I saw it and photographed it back in 2002 at Rusinga Island in Kenya, this one location alone has 12 Ploceus weaver species on the checklist! How the bird got to Singapore is anyone’s guess, and it seems to be still looking for a mate…”

Note: The Golden-backed Weaver was first reported in Singapore in June 2011 LINK when both sexes were seen. Another post reported seeing it again in Lorong Halus in October 2012 LINK and later in Pasir Ris LINK. The latest report was in February 2013 LINK. This is the first report of a male building a nest. 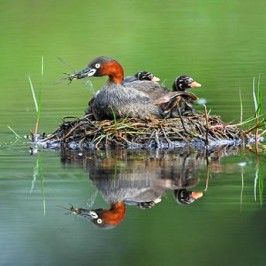