“Shortly after a flock of Asian Openbills (Anastomus oscitans) made their first appearance in the northern part of Singapore LINK, another species made its first appearance in the South. It was a Daurian Redstart (Phoenicurus auroreus); a young female (judging by the prominence of its gape) that made its presence felt in Feb/Mar 2013 at the Gardens By The Bay (above & below). It was there for at least 4 weeks for birders, photographers and other admirers. “From Wikipedia LINK, the Daurian Redstart is a fairly common bird in East Asia, ranging eastwards from Mongolia and the Himalayas. It is migratory and winters in Korea, Japan, southeast coastal China, Taiwan, northern India and parts of Southeast Asia.

“I was at location on 9th Mar 2013 when this female happened to cast pellets (below). It was perched comfortably on a thin stem when it began to behave strangely. The bird was actually preening itself when it seemed to be in a sudden trance. Watching through the camera’s viewfinder, its head seemed to be in subtle vibration. This trance-like state lasted for about 2 seconds. A dark tiny object, presumably a pellet, was coughed out from its throat and was held briefly in its beak. The pellet then disappeared, probably dropped onto the ground below. (Sorry, it happened so fast that neither my camera nor eyes manage to capture that moment.) “After this first pellet was cast, the bird resumed to its normal self. Just five minutes later, after moving on to another perch, the episode was repeated. A second pellet, of similar size to the first, was coughed out.” Birds roost communally for a number of reasons. Coming together reduces their vulnerability to predators.... 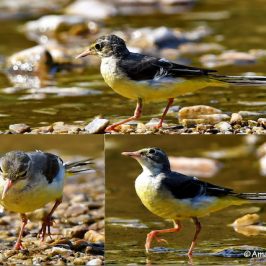 Grey Wagtails (Motacilla cinerea) are not uncommon in the city during the migration period. You...