‘I decided to take a pre-dawn birding visit to one of my favourite patch and found the answer why mist-nets were still left hanging after the harvesting season was over at the paddy fields.

“It was also a good time to do a bird count species of the area during the rainy season that began in November 2012 at the paddy fields.

“A villager appeared to be on security inspection tour of the fields and in his hand, he held a contraption which I initially thought to be a flashlight. We exchanged morning greetings and went our separate ways.

“A few minutes into the observation that yielded nothing that particular morning, I decided to take a look on the other side of the field.

“Bingo! The poachers had just finished a successful night raid of their prized catch – a pair of beautiful Watercocks (Gallicrex cinerea) turning into breeding plumage – held expertly in the hand of same villager I met earlier on.

“They had to approach towards my direction as it was the only way out. We exchanged wide knowingly grins, theirs a bit guilty as the villagers knew the purpose of my birding visits – to document and photograph birds for the benefit of science and study.

“A friendly exchange of ideas and recommendations took place. I was educated by poachers on how those seasonal Watercocks were caught. Most birders/photographers/digiscopists stalked and struggled to get decent views of these skittish birds that seemed to sense our presence a football field away, only to lose them on our approach. “I had the opportunity to photograph the pair of male (above-right) female (above-left) birds, held high together for a documentation pose. “My friendly request to have one of their megaphones switched on to listen to the squawking sounds emitted was also entertained (left).

“The poachers used these contraptions to call the birds out in the dark and chanced a scrambling, flight response into the mist-nets for a catch.

“It reminds me of game-hunters during the open season when game hunting is allowed in certain countries. These licensed sport hunters would be hiding behind tall reeds, blowing their duck whistles, sending wild ducks scrambling out in the open and then, ‘bang’ goes their party of shotguns or similar and sending their dog retrievers to finish the job, bringing home the ‘bacon’ so to speak.

“Duck/goose pate anyone? They are delicious on crackers! The commercial ones I mean…

“Watercocks (Gallicrex cinerea) here came with a mere price tag of RM5 each… said one of the poachers and there is a demand for them especially for ladies in maternal confinement, where a herbal brew of Waterbirds are being drank and eaten for health rejuvenating properties!

“I have heard of coucals especially nestling chicks with feathers and all preserved in brandy and used as anti-rheumatic massage- even drank them but herbal Watercocks?… is something new.

“Rearing free range chicken would have made a better choice under similar circumstances used commonly by the Chinese community. Such would fetch a better price than catching wild birds… was my encouragement.

“I left them with the advice to take precautions about the illegal use of mist-netting and need be, keep a sustainable practice as not to deprive their children and grandchildren the chance to see these wild birds in the near future. “It is not likely I will get another opportunity to see Watercocks at such close views nor another chance to post pictures like this. The handsome male in particular is beginning to moult into breeding plumage as seen on the blackish winged feathers (left).

“This is a sad conclusion that is beyond my means to rescue this birding pair from the cooking pot. I could buy the birds’ freedom but I would only be starting another chain of events a ‘catch-buy-let-go-catch’ cat and mouse game with the village-poachers. Most likely too, I would probably be no longer made to feel welcomed to further observe birds in their village. That means no further bird articles to post from this area.

“Mist-netting has come one full circle… in Malaysia at least – a visionary country in reverse heading for the 16th century? (Japanese invented the mist-netting in the 16th Century for the sole purpose of catching birds for food.)” 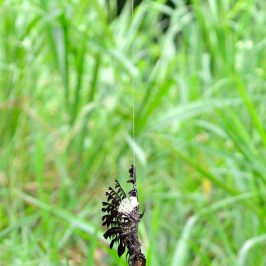