“Little Herons (Butorides striata) have become increasingly common in the urban neighbourhood. I estimate 3-4 adults in a 1.5 km radius. We see them almost daily on the electric wires, commonly at dawn and dusk. “My wife had just gone out to the market when she returned immediately to say two Little Heron were ‘having a go’ on a wire nearby. I quickly joined her with my camera. Light was still limited but views were adequate. They were 3-4 meters apart and one was unhappy with the proximity. It had raised the crest in a very unusual way (above, taken before sunrise). There was no breeze at all to offer any other reason for the raised crest feathers. As one bird made a move forward the other postured further. Not sure how long they had been at it but our watching soon terminated the activity. “I have often watched the social behaviour of these birds and adult males do posture by opening wings with raised crests and intense calls. The second image (above) is from a year earlier, also in the early morning showing the usual crest elevation.” 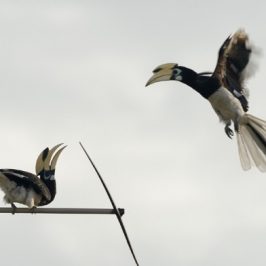 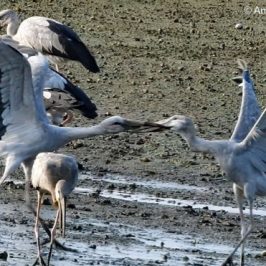 “I have mentioned aggression between Asian Openbills (Anastomus oscitans) in the past (August 2013) but...